Stir intensifies, no peace in sight

Experts say growing support for GJM is a direct challenge to government. 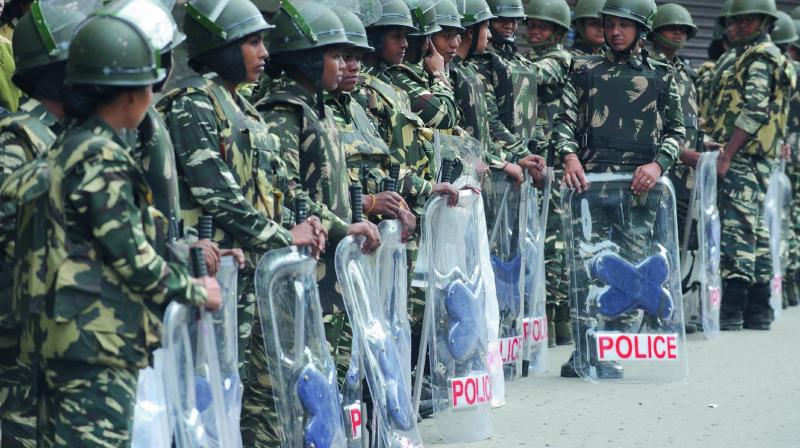 Security personnel stand guard as GJM supporters stage a protest during a strike in Darjeeling on Tuesday. (Photo: AFP)

Two parties — the All India Gorkha League (AIGL) and Jan Andolan Party (JAP) — did not attend the meeting, but expressed their support for a separate state. “We have unanimously decided to fight for Gorkhaland,” Gorkha Janmukti Morcha  general secretary Roshan Giri told reporters after the meeting.

Political experts termed this as a setback and a direct challenge to Trinamul Congress supremo and chief minister Mamata Banerjee, who made it clear that Hills could not be divided. “GNLF was an ally of the TMC in the recently concluded civic elections in Mirik where the TMC could sniff victory — the first by a party from the plains in decades. But here they have vouched the demand of the GJM for a separate Gorkhaland,” a political analyst said.

Niraj Zimba, GNLF spokesperson, claimed that TMC was only their electoral ally and not an ideological one. “The two contexts are in stark contrast,” Mr Zimba said. Suman Sharma, assistant secretary of the BJP Hill district committee, said that he had signed a resolution supporting Gorkhaland.

Darjeeling district Trinamul Congress president and state tourism minister Gautam Deb said, “GNLF was sold out earlier. They made an alliance with us just for electoral benefits. They pretended to be with us, but actually helped GJM win the polls.”

He added that some political parties were inciting the movement and hoped that good sense would prevail upon the protesters, with tourism, the main industry in the Hills, being hit.

Meanwhile, situation in the Hills turned out no better on the second day of the indefinite strike called by the GJM as the agitation spread to the adjacent areas of Darjeeling. The tea gardens in the hills also went into a protest mode, with the protesters holding dharnas in some areas.

In the morning, the protesters held a rally that started from Chowk Bazar and entered the office of the District Magistrate after travelling through different parts of the Hills. As the police team led by SP Akhilesh Chaturvedi urged them to go back, Morcha supporters started throwing stones and bricks at the police.

The police resorted to lathicharge to disperse them. In Jalpaiguri district, more than 100 km away, tea garden workers were lathicharged when they blocked a national highway to demand higher wages.

The two agitations have converged after the Gorkha Janamukti Morcha extended its support to the two-day general strike called by the trade unions. Tourist vehicles were stranded as a result of the tea workers’ agitation demanding higher wages.