The tiger had been under surveillance of camera and a drone after it was spotted in the forest on March 2. 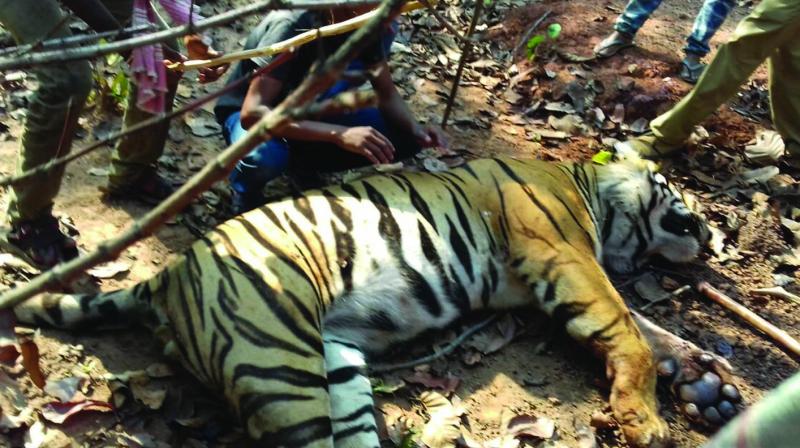 The carcass of the tiger is carried away by a forest department team from Baghghora forest in West Midnapore for autopsy on Friday.

Kolkata: A full-grown royal Bengal tiger was brutally killed in mysterious circumstances under the nose of the state forest department on Friday in the Jangalmahal nearly one-and-half months after it had strayed into a forest at Lalgarh in West Midnapore aparently from Odisha and kept eluding traps. The carcass was found lying with deep injuries by a district forest team at Baghghora forest in Chadra of Midnapore Sadar block.  They suspect that the male tiger was hacked to death by the villagers, mostly being tribals, during their Shikaar Utsob (Hunting Festival). The carcass was sent for an autopsy. A spear and half-eaten carcass of a pig were found near the spot. West Bengal Chief Wildlife Warden Ravi Kant Sinha said, “There were injury marks, caused by spears, in the tiger's neck.”

“The incident might have happened after 10 am because the forest officials knew its location till then. We tried our best by putting cages at different areas of the forest while sending tranquilising teams. But it could not be captured,” said Mr Sinha, however could not explain who killed the big cat.

The forest department informed the incident to the National Tiger Conservation Authority. According to sources, a group of 30 youth noticed the tiger near a creek while visiting the forest in the morning as part of the festival.

When the group was crossing the creek, the tiger attacked them. Two youth — Bablu Hansda (36) and Badal Hansda (19) — who were injured were treated at Midnapore Medical College and Hospital.

Later the carcass was found. State forest minister Binay Krishna Burman informed that he has sought a report from the department over the incident.

The tiger had been under surveillance of camera and a drone after it was spotted in the forest on March 2. Notably, the tiger was spotted under a culvert on March 30.

Expressing her shock over the tiger's killing actor-turned Trinamool Congress MLA Debashree Roy, an animal activist, said, “It is a very sad incident. It shows the lack of awareness among the common people specially when animals found dead with injuries. I do not know how it happened. But I fail to understand what pleasure one gets by hunting. The common people need to be aware.”

Slamming the tiger's killing Jaydip Kundu, member of the State Board for Wildlife under the forest department, observed, "It is a shame for West Bengal where the tribals are still continuing with the barbarism by killing of animals in the name of Shikaar Utsob. Our state's name is associated with Royal Bengal tiger. After this incident, Bengal does not deserved to be associated with tiger."

Another member of the forum Bishwajit Roy Chowdhury said, “I am surprised to find as towhy the tiger could not be caged after a hunt for the past one and half months." Describing the incident as "unfortunate" Inspector General of Forest (Wildlife) of the environment ministry Soumitra Dasgupta however said, "I know the West Bengal forest department officials are very competent. The state government tried their best in tracking the tiger. A detailed inquiry should be conducted to know the cause of death.”