The CPI and the CPI(M) had been mocked time and again for being more aligned to their counterparts in China and the erstwhile Soviet Union. 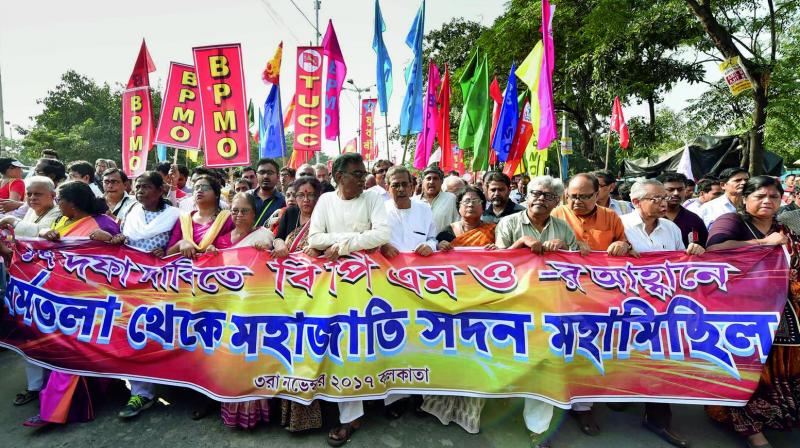 Kolkata: The Left, which is facing a political “crisis” in Bengal, is observing the centenary of the October Revolution as the Front feels it would inspire its grassroot workers to regain their lost ground and also chalk out a way to counter the “divisive forces” in the country.

The Left parties in Bengal like the CPI(M) and the CPI feel the success and teachings of the Revolution will help attract the young generation towards them, leaders said.

“Yes, it is true that we are facing a crisis. That is why the teachings and the success of the October Revolution are more important for us not only to derive inspiration from it but also to chalk out a path to counter the divisive forces,” CPI(M) central committee member Basudeb Acharia said.

The CPI(M) and other Left parties have organised month- long political programmes across the state to commemorate 100 years of the October Revolution. Asked how the celebrations would help to regain the lost ground for the Left, CPI(M) Politburo member Hannan Mollah said the USSR had made records in wiping out poverty, backwardness, and illiteracy.

“The Soviet Union had also created records in establishing equality among people and nationalities and gender. So it teaches us the power of socialism. In India, divisive politics is at its peak and only socialism and its policies can fight it,” he said.

Mollah, however, refused to attach any importance to the criticism by opposition parties about the Left’s alleged ‘over enthusiasm’ with Russia, China and Cuba.

The CPI and the CPI(M) had been mocked time and again for being more aligned to their counterparts in China and the erstwhile Soviet Union. CPI national council member Prabir

Deb said the celebrations are part of the process to reach out to the masses, especially youths about the success of the October Revolution.

“The teachings of the revolution is very much significant in Bengal today where the working class is being exploited by the ruling government,” he said.

The once invincible Left Front is facing a tough challenge as the BJP aims to replace it as the main opposition in Bengal. The vote share of the CPI(M)-led Left Front, which had kept aside its ‘ideological convictions’ to align with its one-time foe - the

Congress - to oust the Trinamool Congress regime in Bengal in the last assembly elections, has been on the decline over the last few elections. The BJP has mocked the Left over its celebration of 100 years of the October Revolution.

“The Left in India always suffered from ideological bankruptcy.  And that is why they had to look up to revolutionaries from other countries and ignored the freedom fighters of our own country. By doing such things they have turned into a laughing stock,” BJP state general-secretary Sayantan Basu said.