Body of the 67-year-old was found trapped under a wooden structure on the diving zone of the swimming pool. 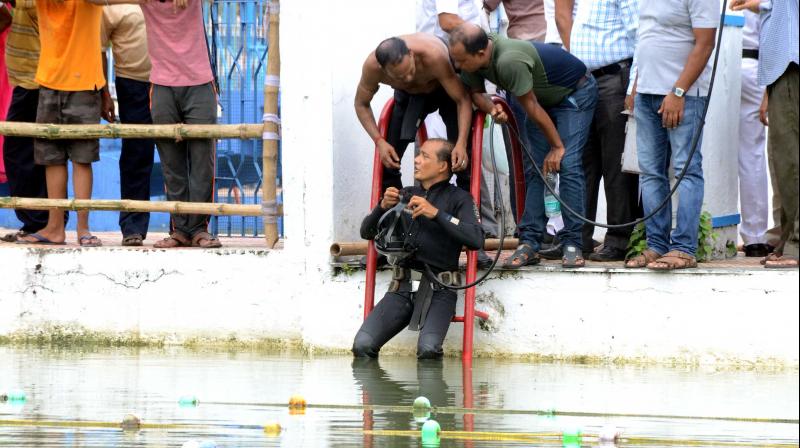 The resident of Ramnath Biswas Lane had gone to the pool for swimming at around 7 am on Friday but had suddenly drowned. (Photo: Asian Age)

Kolkata: The body of swimming coach Kajal Dutta was fished out of the College Square Lake by the divers of the Kolkata police in the wee hours of Saturday after nearly a 20-hour-long search. The resident of Ramnath Biswas Lane had gone to the pool for swimming at around 7 am on Friday but had suddenly drowned. He was also the instructor of Bowbazar Byayam Samity.

According to the police, The body of the 67-year-old man was found trapped under a wooden structure on the diving zone of the swimming pool at around 2.45 am.

It was traced by the divers of the disaster management group of the city police only after the water was pumped out of the lake, sources revealed. However, mystery shrouds the deep injury marks found on Dutta’s back. The body was later sent for post-mortem at the Calcutta Medical College and Hospital. The police suspect that Dutta may have died after he got stuck in the wooden structure after he drowned.

Questioning lake officials, investigators learnt that he was fond of catching prawns under water while swimming. Dutta might have got stuck in the structure while doing it and died. Dutta has been a national-level swimmer and was a senior trainer at the College Square lake. Locals said the sexagenarian seen going in the pool at about 7 am on Friday but was not seen coming out of the water, the police said. He had been missing since.