Sen, who is presently at his hometown in Santiniketan, in Birbhum, refused to be dragged into the controversy. 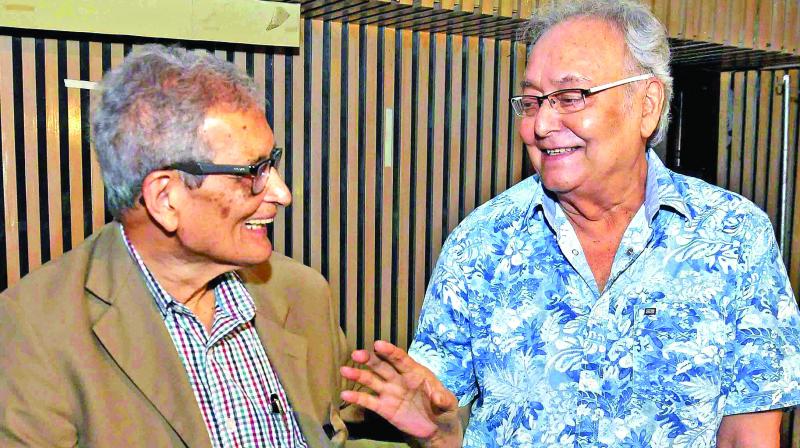 Kolkata: West Bengal chief minister Mamata Banerjee on Wednesday hit out at the Central Board of Film Certification (CBFC) for red flagging a documentary shot on Nobel laureate Amartya Sen and alleged that every single voice of the Opposition was being muzzled.

Director Suman Ghosh was told on Tuesday night to mute the words “Gujarat”, “Cow”, “Hindutva view of India” and “Hindu India” for getting a U/A certificate for the documentary.

“Every single voice of Opposition is being muzzled. Now it is Dr Amartya Sen. If someone of his stature cannot express himself freely, what hope does the common citizen have?” Ms Banerjee tweeted. Dr Sen, who is presently at his hometown in Santiniketan, in Birbhum, refused to be dragged into the controversy.

“What can I say about this? This film is not made by me. I am the subject of the film and the subject should not be talking about these things. Director Suman Ghosh will say whatever needs to be said. It does not look good for me to say something on this matter,” Dr Sen said when reporters sought his reaction on “An Argumentative Indian” failing to get the nod of the censor board. He however suggested that the government should speak to the shareholders about its disapproval.

Dr Ghosh asserted that he would not exclude any words from his film. “I expressed my inability to them. Taking out certain words from the discussion between Dr Sen and the interviewer, economist Kaushik Basu, would rob the soul of the documentary,” he argued. He added that he awaited a written communication from the CBFC on whether it would send the film to the review committee in Mumbai.

“The film is very topical in today’s scenario. These days films get online certifications. So I hope the issue gets resolved quickly. But no question of taking out some words. In fact, this episode has convinced me that I have portrayed the true picture through this documentary,” Mr Ghosh said.

The film had a special screening in Kolkata on Monday and was scheduled for release in a number of theatres on Friday. It has already been screened in New York and London.

Veteran actor Soumitra Chatterjee slammed the move. “Why will we say that we are living in a democratic country when somebody is not allowed freedom of speech and that too of a person who is acknowledged and honoured in the whole world. This is fascism and I am sorry to say that here even what a people should eat is being dictated,” he said.