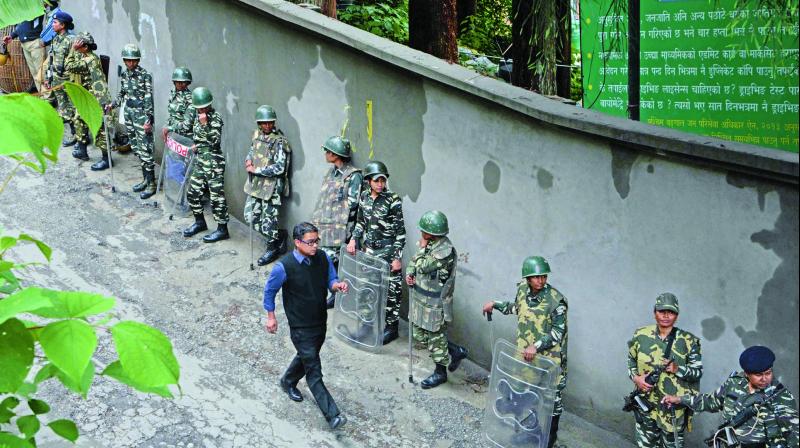 Army personnel stand on guard along a street during the indefinite strike called by the Gorkha Janmukti Morcha in Darjeeling. (Photo: AFP)

Kolkata: The indefinite bandh by the Gorkha Janmukti Morcha (GJM) in Darjeeling that began from Monday witnessed incidents of sporadic violence with GJM activists desperate to enforce it. Government offices however recorded normal attendance with a strong police deployment of in front of various offices to ensure office goers were not inconvenienced.

Trinamul Congress Darjeeling district president and state tourism minister Goutam Deb said, “The people have defied GJM’s diktat and attended office. Schools also recorded a normal attendance. People of the Hills do not support the violence that the Morcha supporters have unleashed to enforce their undemocratic and illegal bandh.”

GJM activists began the day by allegedly trying to set fire to a BDO office at Phulbazar in Bijanbari block. Later in the day they allegedly ransacked an office of the power department at Sonada, damaged another office at Labong Cart Road and tried to close down a gram panchayet office at Sukna.

Many Morcha supporters were arrested and several others were detained. Police pickets and barricades were placed in front of the government and GTA offices while Rapid Action Force (RAF) and a sizable number of women police personnel were also deployed.

Roshan Giri, general secretary of the GJM denied his party’s involvement in the incidents and claimed the allegations were an effort to defame the Morcha. “We have not resorted to forcible enforcement of bandh. If we really wanted to do that, we could have fielded hundreds of our supporters and closed down the offices. We want Central intervention. Our party chief has written to the Prime Minister and union home minister Rajnath Singh to sympathetically consider our demand (for Gorkhaland),” he said.

Chief minister Mamata Banerjee, who addressed a government programme at Bhangar  in South 24 Parganas, challenged the Morchas. “They had threatened that they would not let me enter the Hills. I went there held the cabinet meeting, made the Hills peaceful and returned. They will hurl one or two more bombs and will stop by themselves,” she said.

Addressing the GJM activists as ‘Goondas’, the chief minister said, “Goondas are not the assets in the country. There are some leaders who are trying to create disturbance in the Hills. Do not let them do so. The Hills is our motherland and the people there are very good.”

The government kept on the pressure on the Morcha by announcing that the special audit of the funds will be undertaken in the three more municipalities in the Hills including Kurseong and Kalimpong. A five-member audit team spent hours in the office of the district magistrate Darjeeling and collected some important files and records.