The high court also said that the SEC should have informed it today that it has ensured a level-playing field for all parties. 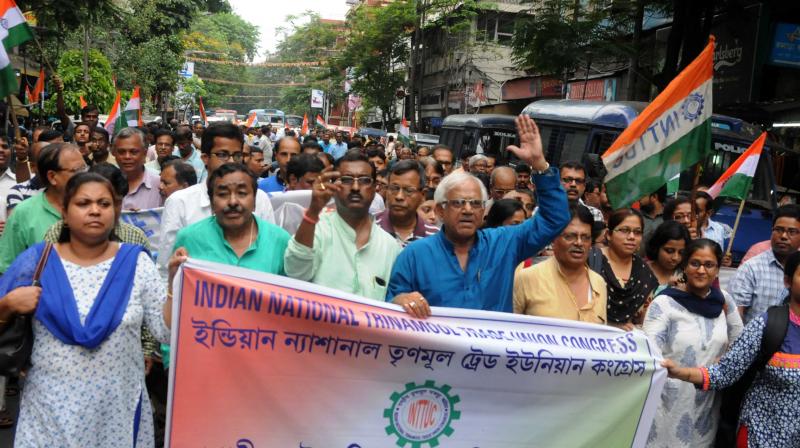 Kolkata: The Calcutta high court today stayed the ongoing panchayat election process in West Bengal, expressing displeasure over the decision of the State Election Commission (SEC) to cancel its own order extending the nomination process by a day.

Opposition parties in the state termed the high court order as a “victory of democracy over dictatorship” and sought the resignation of chief minister Mamata Banerjee, alleging widespread violence during filing of nominations.

Rejecting the SEC’s contention that the writ petition of the BJP was not maintainable, the court held that the state poll panel is endowed with powers relating to holding of the elections, but in case of any digression, it needs to be corrected by the court of law.

Passing the order on the petition, Justice Subrata Talukdar stayed till further orders the ongoing panchayat election process in the state.

He observed that the commission had recognised the grievances expressed by different political parties as well as individuals by extending the date.

“However, the order was abruptly withdrawn,” he said.

Referring to yesterday’s Supreme Court order with regard to a petition by the West Bengal unit of the BJP challenging the SEC’s decision to recall the extension order, Justice Talukdar said that the operative part of the apex court order is crucially connected to the cancellation of the notification.

The high court also said that the SEC should have informed it today that it has ensured a level-playing field for all parties.

While staying the panchayat elections, the judge also sought from the SEC by Monday a comprehensive status report on the poll process, detailing the number of nominations filed and the percentage of those rejected, among other issues.

The court said it would hear on April 16 the pleas challenging the SEC’s decision to withdraw its April 9 notification, which had extended the date for filing nominations by a day.

The BJP had challenged the cancellation of the April 9 notification.

Justice Talukdar also expressed his displeasure over the conduct of the BJP leader Pratap Banerjee, who appeared in-person before the court, for not disclosing that a similar petition had been moved by the party before the Supreme Court simultaneously.

He also took a very dim view of the conduct of the BJP representative.

“However, in view of the public interest involved, this court is not vacating its directions to the SEC,” the judge said.

Likening the BJP’s conduct to forum hopping, Justice Talukdar imposed `5 lakh as costs on the party, which would have to be deposited with the registrar general of the high court.

Representing the Trinamul Congress, its vice-president Kalyan Banerjee earlier prayed for vacating the order on the SEC, alleging that the petitioner had suppressed that it had moved both the high court and the apex court with similar petitions. BJP national general secretary Kailash Viijayvargiya said the judgment was a blow to the ruling TMC.

“The ruling TMC has tried to turn the panchayat polls into farce by not allowing the opposition candidates to file nominations. This high court ruling is a triumph of democracy over dictatorship,” Vijayvargiya told reporters.

“We will not comment on the court order. The law will take its own course. The Opposition parties do not enjoy popularity among the masses and that is why they are approaching the courts (to stall proceedings),” he said.

Mr Chatterjee said that they (opposition) are insulting the people.

Leader of the Opposition and senior Congress leader, Abdul Mannan also welcomed the judgment and demanded the resignations of the chief minister, besides State Election Commissioner A.K. Singh.

“The people of Bengal can get justice only by moving courts because the entire state administration has been turned into a back office of the ruling TMC. The chief minister and the (state election) commissioner should immediately tender their resignation as they have turned the poll process into a joke,” Mr Mannan said. Left Front chairman Biman Bose said, “We welcome the high court order. The ruling TMC is trying to murder democracy in Bengal. We have been saying this for a long time that democracy is under threat and opposition parties are not being allowed to file nominations.”

The CPI(M)-led Left Front has called a six-hour general strike in the state tomorrow to protest the alleged violence during the filing of the nominations.