After searching the area with BSF tracker dog, officials recovered 12 gunny bags in which 48 kg of the contraband item was found. 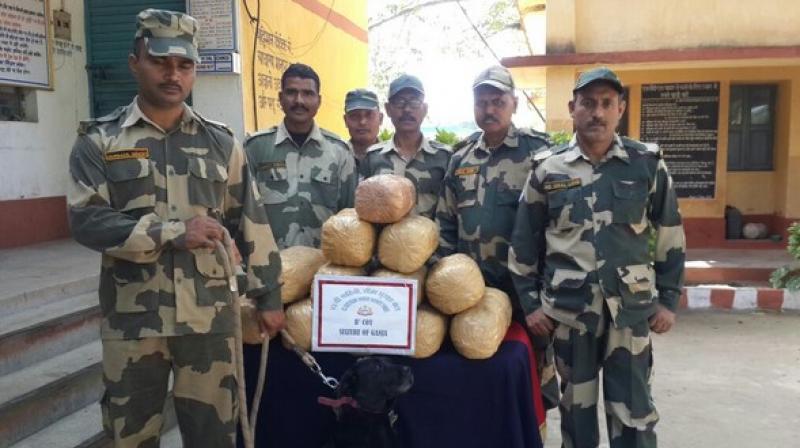 The seized ganja has been handed over to Customs official at Jalangi. (Photo: ANI)

Kolkata/Nadia: The Border Security Force (BSF) has seized 48 kg of cannabis from Berhampore in Nadia district of West Bengal.

Based on a tip-off that smuggling of ganja was taking place in the Border Outpost (BOP) Meghna of BSF's 43 Battalion under Hugalberia police station in Nadia district, a special ambush was carried out by BSF troops in the banana orchard of the area.

A BSF statement said on Saturday that at about 1930 hours the ambush party noticed suspicious movement of 15 to 20 persons in the Indo Bangladesh Border Road (IBBR) with head load stealthily taking cover of Banana orchard.

On being challenged by the BSF, the smugglers managed to escape towards the Indian side.

After searching the area with BSF tracker dog, they recovered 12 gunny bags in which 48 kg of the contraband item was found.

The seized ganja has been handed over to Customs official at Jalangi.

Keeping in view the vulnerability of the border from smuggling point of view, the BSF has issued operational guidelines to further strengthen border domination so as to effectively check the menace of smuggling and other activities of anti-national elements on South Bengal Border with .

Tactical operations are being mounted to foil the attempts of the smugglers.