It is the religion which was born in our soil. We will take lessons of Hinduism from Ramakrishna and Swamiji. 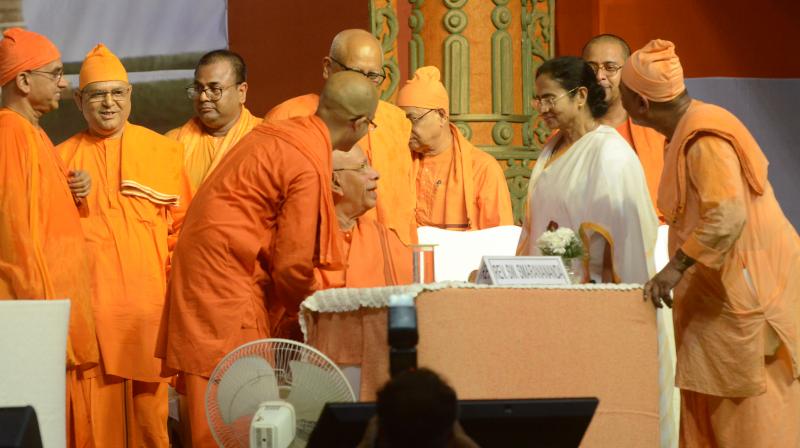 Kolkata: Levelling an explosive allegation against the Modi government, chief minister Mamata Banerjee on Tuesday claimed that Ramakrishna Mission was “threatened” to stop her from visiting the US where she was scheduled to address an event on August 26 this year on the 125th anniversary of Swami Vivekananda’s famous speech at Parliament of Religion in Chicago.

She revealed that the incident had left her pained and saddened. Her US trip was called off in June close on the heels of the postponement of her China tour. “We had taken an initiative to visit Chicago and to be in hall where Swamiji had delivered his famous address. Call it fortune or misfortune, I could not go there although the invitation had come from Ramakrishna Mission itself. Ms Banerjee said at Belur Math at a programme to celebrate the occasion of Vivekananda’s Chicago address.

In an oblique reference to the BJP she complained, “I feel an unholy nexus worked behind it. Some people did not want me or people from Bengal to the event organised by Ramakrishna Mission. There is no doubt it left a scar in my heart. I have been pained and saddened. Some people think themselves to have become very powerful. The reasons you have shown to bar me from visiting Chicago are all known to me.”

Ms Banerjee added, “I do not blame the Ramakrishna Mission for this. As far as I know they were also threatened. But they can not comment on it. But I can because I know the incidents. I still believe that no one can be restricted and stopped like this. Swamiji and Ramakrishna Paramhansa live in our minds. Nothing can be done by halting any programme.”

She argued, “The Hindu religion which Swamiji preached was not about importing from outside. It is the religion which was born in our soil. We will take lessons of Hinduism from Ramakrishna and Swamiji. We will not take any imported version from anyone else. Its my belief. One should learn to sacrifice to become a leader. He who is devoted for the nation becomes a leader.”