Modi’s ‘death knell’ will be heard after polls: Mamata Banerjee

Daring the PM to harm her, she even declared that he would not be able to do anything beyond murdering her or sending her behind bars. 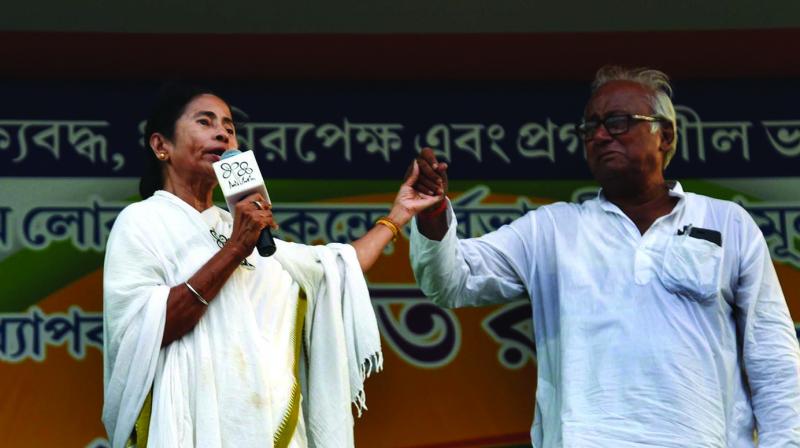 Kolkata: Launching a ferocious attack on Prime Minister Narendra Modi, Trinamul Congress supremo Mamata Banerjee on Saturday claimed that his “death knell” has started tolling. She declared that her ‘United India’ rally at the Brigade Parade Ground on January 19 paved the way for “farewell bell” to Mr Modi.

Daring the PM to harm her, she even declared that he would not be able to do anything beyond murdering her or sending her behind bars. The “death knell” remark by the West Bengal chief minister at Murarisha in Hasnabad of North 24 Parganas is bound to cause controversy at a time when the Lok Sabha elections are underway.

Addressing a poll campaign rally in support of actor turned TMC candidate Nusrat Jahan Ms Banerjee told the crowd, “Remember, it is only me who speaks against Mr Modi Babu. Someone had to bell the cat, which we did in Bengal. That is why a farewell bell is ringing for him in the entire country.”

She added, “ Modibabur Mrityu Ghanta Bajchhe (Modi Babu’s death knell is tolling), which we have done at the Brigade Parade Ground.” Lashing out at the PM, Ms Banerjee alleged, “When the people of the country failed to speak up in fear, it was only Mamata Banerjee who spoke up. Mr Modi Babu, I challenge you. What (harm) can you do to me?”

She argued, “Maximum you can kill me or slit my throat or send me to jail. But you cannot do anything beyond that. The press would not utter a single word against Mr Modi Babu because he threatens them. Even a single leader cannot speak against him in fear. We have declared that the BJP would be finished in 2019.”

Ms Banerjee, “This is 1426 (Bengali New Year) and it will be 42 out of 42 in Bengal. That is why Mr Modi Babu has been scared. The saffron party is carrying Jhanda (flag) in one hand and Danda (stick) in another with boxes of money.” She underlined that the people of Basirhat did not trigger riots a few years ago.

“They did not give food, clothes and shelter to anyone. They have only offered riots. People of Basirhat did not incite riots. Opening the gates at the Indo-Bangla border, the BSF allowed the miscreants to cross over to trigger the riot,” she complained.