BJP candidate not only refused to sign in the seizure list but also forced police to delete the video which they were making. 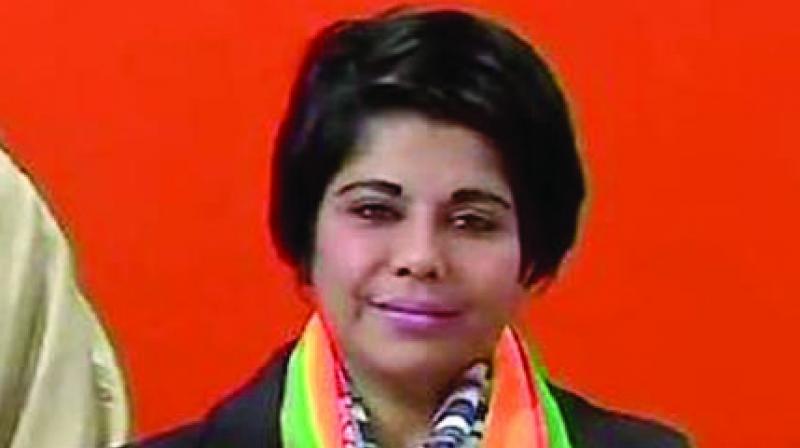 Kolkata: Two days before facing the Lok Sabha election, BJP candidate from Ghatal in West Midnapore, Bharati Ghosh landed in fresh trouble after she was  named in an FIR on non-bailable charges by the police following the recovery of Rs 1.13 lakhs in cash  from her car, which led to her detention of nearly four hours late on Thursday night.

Sections 353 (assault/use of criminal force to deter a public servant from discharge of his duty), 506 (criminal intimidation), 186 (obstruction to public servant in discharge of his public duty), 143 (member of an unlawful assembly), 295 (injuring or defiling place of worship, with intent to insult the religion of any class) and 34 (common intention) of the Indian Penal Code have been slapped in the case at the Pingla police station on Bharati Gosh and her three aides.

Section 353 is a non-bailable offence. At around 11 pm, a static surveillance team comprising of cops intercepted Ms Ghosh’s car at Mangalbar in Pingla following a complaint by the local Trinamul Congress workers who alleged that she was carrying huge amount of cash for distribution to the voters. While searching her car the cops recovered Rs 1,13,895.

However, the BJP candidate not only refused to sign in the seizure list in front of the cops but also allegedly forced them to delete the video they were making. She was detained by the police for four hours during which she was questionned by them before she was allowed to leave at around 2.45 am. On Friday morning, the office of chief electoral officer (West Bengal) sought a report from district magistrate (West Midnapore) on the entire incident and apprised the EC.

Ms Ghosh, however, claimed that the money was not illegal. “I raised election fund and used it legally and its is not a crime. I have all the papers to prove that I have withdrawn the money from bank. Why was the money, that belongs to me is seized? Am I not entitled to carry any money?” she asked.

Ms Bharati alleged, “The seizure implies that I can not carry a penny even with me while going out. They seized each and every note from my bag. How can they do it? Where is the EC? I have been complaining to the EC on various issues for the past 15 days. But there has been no action. I have lost my faith in that agency.”