The protesters also set on fire the subdivisional office in Kurseong, leading to the building getting partially burnt, the state police said. 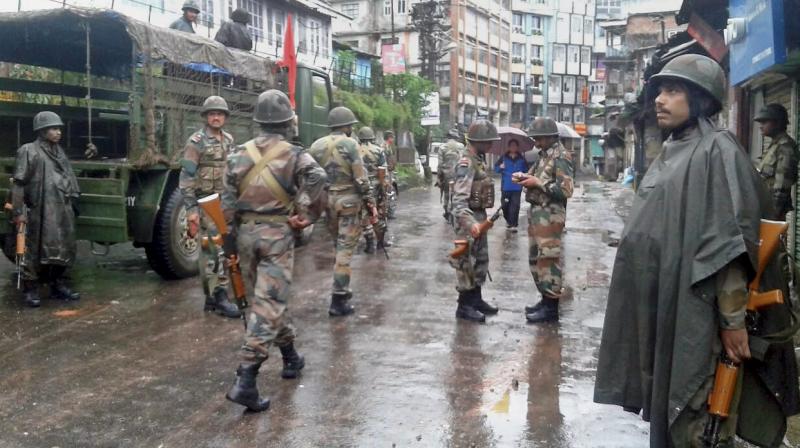 Army jawans on patrol in Darjeeling town on Sunday before the funeral procession of two people who had died in the police firing. (Photo: PTI)

Kolkata: Violence and arson continued to rock Darjeeling even on Sunday with the Gorkha Janmukti Morcha (GJM) allegedly setting fire to the police station at Sonada and ransacking government establishments. The all-party meet called by the coordination  committee of agitating parties that was due to be held on July 18 was advanced to Monday. Three people were allegedly killed in police firing in the Hills on Saturday and the Army has been deployed to bring the situation under control.

The protesters also set on fire the subdivisional office in Kurseong, leading to the building getting partially burnt, the state police said.

Pro-Gorkhaland activists also torched the Pokhribing panchayat office and vandalised a police outpost in Darjeeling’s Pokhari on Sunday. However, the worst attack was in setting fire to the Sonada police station in the afternoon. Many important files and documents were destroyed by the fire and four police personnel were injured as they ran for cover. Mirik also erupted later, with GJM activists setting fire to a police vehicle.

As GJM supporters held rally across Chowkbazar with two dead bodies on Sunday, there were no police or CRPF personnel present. The Army jawans kept watch as they marched along. “It was a tactical move as we believed that the peaceful rally may turn violent with the Morcha supporters seeing the police and CRPF as they had alleged their role in the killing of the two,” a senior police official posted in the  Hills said.

Trinamul Congress secretary general Partha Chatterjee alleged that there was involvement of “foreign forces” in triggering the violence in the Hills, and added: “We are ready to shed blood and sacrifice our lives but will not allow the division of Bengal. People of Darjeeling are suffering, and the zoo animals are not getting food.”

He also attacked Darjeeling’s BJP MP S.S. Ahluwalia for remaining mum over the recent violence. “In the beginning he made a lot of comments about Darjeeling. But where is he now?” Mr Chatterjee asked.

The violence in the Hills has spread to the Dooars as well, with miscreants setting fire to the Neora Forest Range office at Gorubathan.on Saturday night. Three vehicles, including one belonging to the police that was stationed adjacent to the forest range office, was torched.

Jalpaiguri district TMC chief Sourav Chakraborty said: “We will not allow unrest in the Dooars. The people here will thwart all attempts at violence here.”