Mamata: Kin of labourer killed in Rajasthan will get job, Rs 3 lakh 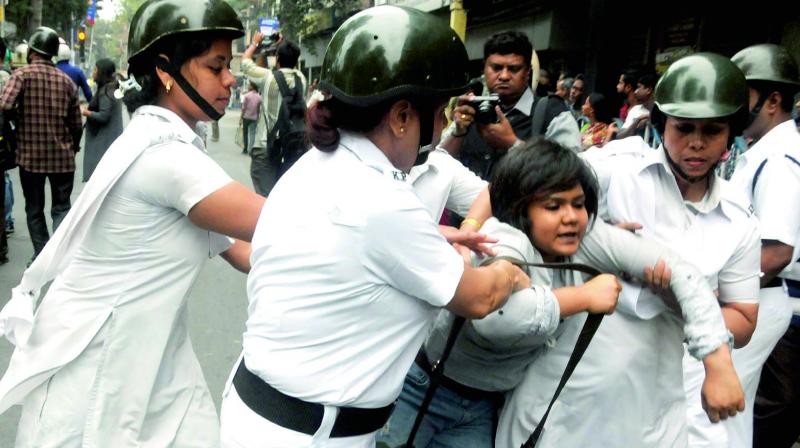 Police personnel detain a Left student during their protest in north Kolkata on Friday against the killing of a labourer in Rajasthan on Wednesday.

Kolkata: Condemning the murder of Afrajul Khan, a resident of Malda from West Bengal, over suspected love jihad in Rajasthan, chief minister Mamata Banerjee on Friday announced a compensation of Rs 3 lakhs for his family.

She also informed that her government would give a job to a family member of the slain. Ms Banerjee also spoke to the victim’s wife over the phone.

Expressing her shock on twitter, she said: “Very sad incident happened in Rajasthan. Afrajul Khan of Malda of our state was brutally killed. His family is totally helpless. As a small help to the bereaved family, our government has decided to provide Rs 3 lakh to the family and also one job to the eligible person of the victim’s family. Other help from the government will also be provided. I am sending our team of ministers and MPs to visit the family.”

The chief minister spoke to the victim’s wife Gulbahar. Gulbahar later said, “The chief minister asked us to not to worry. She assured me that her government is beside us. I have demanded to her for severe punishment for the accused.”

A Trinamul team including MPs will leave at night for Malda to meet Afrajul’s family.

Khan moved to Rajasthan from Saiyadpur village to earn his living. He is survived by his wife and three daughters—Jansar and Rezina, and Habiba.

Rejecting the claim of Afrazul’s marriage to a local woman, Gulbahar described her late husband as dutiful towards the family.

In the evening, Ms Banerjee’s nephew and Trinamul Lok Sbaha MP of Diamond Harbour Abhishek Banerjee led a candle-light rally from Hazra to Gandhi Statue on Mayo Road to protest the gruesome murder.

Also, several party MPs including Subrata Bakshi and party ministers and MLAs were part of the march. Slamming the BJP, Mr Banerjee said, “It was a brutal, barbaric and painful incident. Such an incident is rare in the country’s history. It never happened before. It is a matter of surprise that these brutalities are taking place in the states ruled by the Bharatiya Janata Party.

In the past six years, such incident did not happen in West Bengal.

The incident also proves that there is no rule of law in Rajasthan. Be it the Rajasthan government or the Modi government at the Centre none has succeeded in restoring law in that state.”

He added, “People like Dilip Ghosh (the state BJP president) take out rallies displaying arms in public which has been reflected in the incident through the way Afrajul was chopped and was then set on fire. That is why we took out the protest rally with our rank and file. We demand exemplary punishment for the accused.”

Urban development minister Firhad Hakim said, “It was an inhuman incident. There should be protests across the country.”

At a rally CPI(M) state secretary Surjyakanta Mishra alleged, “Riots and killings are taking place in the name of religion, cow vigilantism, love jihad. A similar incident happened in Rajasthan. It was a very unfortunate incident. Such incidents are carried to divert to public attention.”

Afrajul’s body was brought to his home in the evening for last rites.