NDRF deploys 16 teams to deal with situation, schools to be shut. 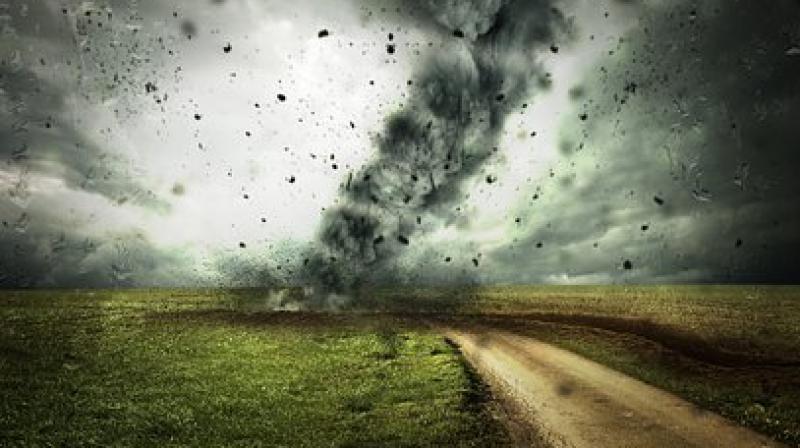 Cyclone “Bulbul” has further intensified its shape and power over the Bay of Bengal, turning into a “Very Severe Cyclonic Storm”. (Photo: Representational/ Pixabay)

Kolkata: Cyclone “Bulbul” has further intensified its shape and power over the Bay of Bengal, turning into a “Very Severe Cyclonic Storm”. It is expected to hit West Bengal late on Saturday night before moving towards Bangladesh. Sundarbans delta in South 24 Parganas is feared to be the worst-affected followed by North 24 Parganas, West Midnapore, East Midnapore, Jhargram, Howrah and Kolkata.

The Mamata Banerjee government has declared closure of the primary schools in the seven districts. The Indian Navy has deployed its warships carrying disaster relief materials in the Bay of Bengal to tackle Cyclone Bulbul. 16 teams of the Indian Coast Guard, the National Disaster Response Force and disaster management group of the state government have also mobilised its assets.

At 9 pm on Friday, the India Meteorological Department stated that the cyclone moved northwards at 17 km per hour speed in the past six hours before it lay centred over northwest and adjoining westcentral Bay of Bengal about 220 km south-southeast of Paradip in Odisha, 350 km south-southwest of Sagar Islands in West Bengal and 470 km south-southwest of Khepupara in Bangladesh.

The cyclone, which is very likely to intensify slightly till Saturday early morning, is all set to move nearly northwards for some more time and re-curve northeastwards thereafter. It is very likely to cross West Bengal-Bangladesh coasts between Sagar Islands and Khepupara across Sunderban delta by November 9 midnight as a ‘Severe Cyclonic Storm’ with maximum sustained wind speed of 110-120 kmph gusting to 135 kmph.

Naval Officer-in-charge (West Bengal) Commodore Suprobho K De said, “Four-five ships loaded with relief materials have been deployed near Vizag and in the sea. Some of them are Landing Ship Large while others are off shore patrol vessels. They are now following the routes of the Cyclone so that relief materials can be reached as fast as possibile after it hits an area.”

The Navy has kept a five-member team of divers, who have been brought in INS Netaji Subhas in Hastings from Eastern Naval Command Headquarters in Vizag, ready. Ten more teams are on standy at Vizag. The Coast Guard regional headquarters (North East) in Kolkata informed that it has initiated actions as per the standard operating procedure prior the onset of the Cyclone ‘Bulbul.’ It said, “Eforts have been launched by the Coast Guard on the West Bengal and Odisha coast in co-ordination with fisheries department to get back the fishing boats out at sea to nearest harbour for shelter, since the frst warning was issued by IMD on November 4. The ICG Ships and aircraft on patrol relayed information regarding the Cyclone ‘Bulbul’ and advised all sea-going vessels, especially the fishing boats, dinghies, to return to harbour for safety.”

The Coast Guard regional headquarters (NE) is in close liaison with the state Governments of Odisha and West Bengal for sharing the inputs on movement of Cyclone ‘Bulbul’. Disaster Relief Teams and Medical Teams are standby at all ICG Stations for providing disaster relief if need arises.”

The Kolkata Port Trust said, “In view of deteriorating weather, all precautionary measures are being taken at Kolkata Port Trust including Kolkata Dock System and Haldia Dock Complex. A control will be opened from tomorrow morning. Pilot launches will be sent to Haldia for shelter after night boating of Haldia inwards and outwards. Shipping will remain suspended till weather improves.