Moon and Mars: Double celestial event coming up this month

On the intervening night of July 27-28, the Moon will be totally eclipsed for one hour, 43 minutes. 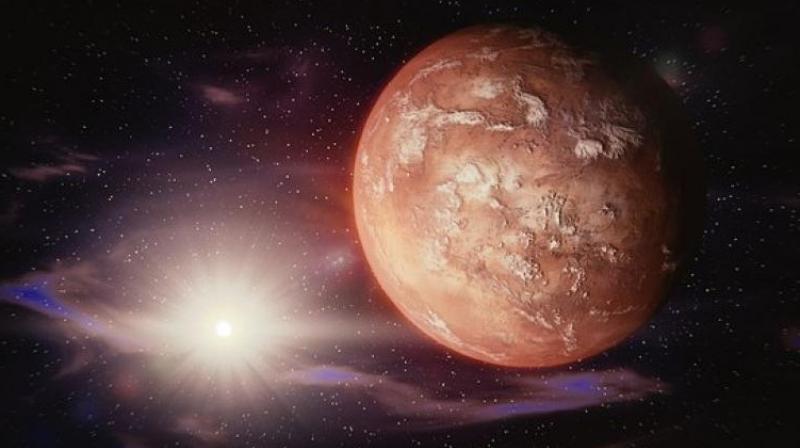 Kolkata: With Mars closer than it has been in 15 years, almost double the brilliance of Jupiter through the naked eye, and the longest total lunar eclipse of the century, space enthusiasts can tune into the skies for a double celestial delight this month.

On the intervening night of July 27-28, the Moon will be totally eclipsed for one hour, 43 minutes. The event can be observed in a large part of the globe, including in India, where it can be seen after 11.54 pm Indian Standard Time on July 27.

According to Dr Debiprosad Duari, director, Research & Academic, MP Birla Institute of Fundamental Research, it will be the longest total lunar eclipse of the century.

On July 31, Mars, the fourth planet from the Sun, will be 57.6 million kilometres from Earth, the closest it has been since 2003 when it came within 55.7 million kilometres, which was the nearest in almost 60,000 years.

“The Red Planet will be at its brightest since 2003, when Mars made its closest approach to Earth in almost 60,000 years since September, 24, 57617 BC,” Dr Duari said. Mars will be visible in the night sky after sunset till sunrise from everywhere in India, provided the monsoon clouds don’t play spoilsport.

Explaining the celestial phenomenon, the astro physicist said the orbital period increases as the distance of a planet from the Sun increases. That is why Earth takes a little more than 365 days to go round the Sun and Mars takes 687 days.

“Due to the difference of the orbital speed and orbital period, in every 26 months or so, Earth passes between Mars and the Sun, bringing Mars and the Sun on exactly opposite sides of it. This is called Mars at the opposition,” Dr Duari said.

This year, Mars will be at its opposition on July 27, only 51 days before it passes  through its perihelion — its closest point relative to the Sun in its orbit.

“Since it will be quite close to Earth by that time, it will appear very bright and will be visible roughly after sunset and will remain in the sky till sunrise. The Red Planet will shine very prominently in our night sky… it will be easier to see it clearly with telescopes or even with the naked eye,” Dr Duari said.

Mars comes close enough for these exceptional viewing occasions only once or twice every 15 or 17 years, he added. “The next opposition of Mars, when it will look relatively brighter and bigger than the average, will be on October 6, 2020. But it will be a little further away, around 61.76 million kilometres from Earth and will be looking relatively smaller and less bright than on July 31, 2018.”

“It will come closer to Earth than it was on 2003 only on 2287 (August 29) when possibly there will be nobody alive present on Earth to witness it,” Dr Duari said.