Mr Ghosh alleged that ruling Trinamul Congress activists have beaten up some BJP workers who managed to reach near the bust. 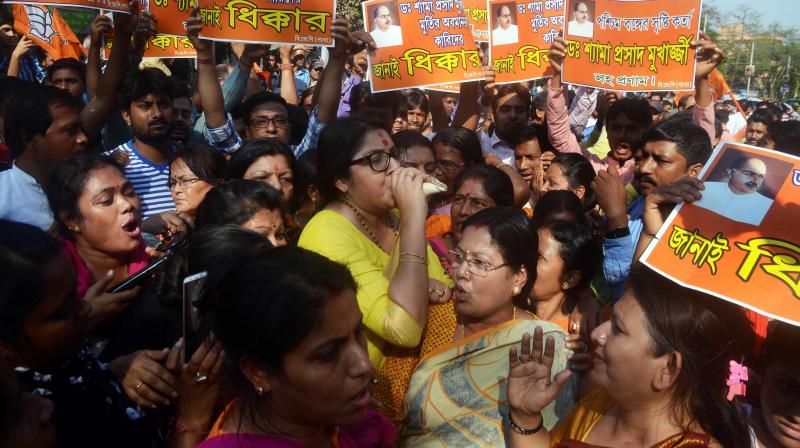 State BJP Mahila Morcha president Locket Chatterjee blows a sankh during their protest rally on Thursday against the miscreants who had defaced the bust of Syama Prasad Mookerjee at Keoratola in Kolkata. (Photo: Asian Age)

Kolkata: BJP workers led by the party’s state president Dilip Ghosh stopped by the police on Thursday when they tried to enter the area where the vandalised bust of Jan Sangh founder Syama Prasad Mookherjee is located.

A large posse of policemen in riot gear with watercanon put up a blockade preventing them from moving forward.

The police said 59 BJP workers, including two women, were arrested for violating law.

Mookerjee’s bust was vandalised on Wednesday by a Left-wing group “Radical” in protest against pulling down of communist icon Lenin’s statue in Tripura.

A showdown was, however, averted with Mr Ghosh calling off today’s programme after slogan shouting and conch shell blowing by women members in the rally which it termed as ‘suddhikoron abhiyan’ (cleansing drive) of the bust.

Demanding that the West Bengal government come up with a plan to restore the vandalised bust, the state Bharatiya Janata Party president threatened to hold protests at all district headquarters on Friday.

Mr Ghosh alleged that ruling Trinamul Congress activists have beaten up some BJP workers who managed to reach near the bust.