No discrimination against Biharis: CM Banerjee

A total of five FIRs have been registered against Banerjee for her comments on NRC exercise since its publication on July 30. 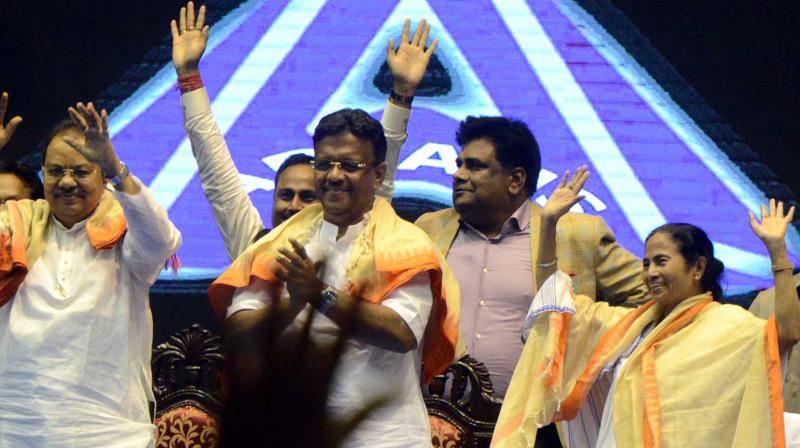 Chief minister Mamata Banerjee along with other ministers during a programme organised by the “Bihari Samaj” at Netaji Indoor Stadium in Kolkata on Friday. (Photo: Abhijit Mukherjee)

Addressing a programme hosted by the Rashtriya Bihari Samaj here Friday evening, she asserted there would be no discrimination against Biharis in West Bengal.

“In Assam, around two lakh Biharis did not find a place in the NRC draft. Several Bengalis were also excluded from the list. Majority of those left out of the draft were people who did not hail from Assam,” the chief minister said.

The NRC draft, published on July 30, featured over 2.89 crore names out of nearly 3.29 crore applicants. Around 40.07 lakh applicants, however, did not find a place in the document, touted to be a proof of Assamese identity.

Banerjee asked people to wait for the declaration of the final draft of the register following the disposal of claims,objections and corrections. In Bengal, Biharis will never be treated as outsiders, Ms Banerjee maintained.

“This kind of treatment was never meted out to Biharis in West Bengal in the past, nor will it be the case in future. Long live Bengali-Bihari unity,” she stated.

Earlier, too, the Trinamool Congress supremo slammed the BJP over NRC publication, stating that “Indian citizens have become refugees in their own land”.

She alleged that the exclusion of over 40 lakh people was an “attempt to evict the Bengalis and Biharis from Assam”.

A total of five FIRs have been registered against Banerjee for her comments on NRC exercise since its publication on July 30.