The blast occurred Wednesday night, two days after shops and markets opened in the Mirik and Kurseong sub-divisions. 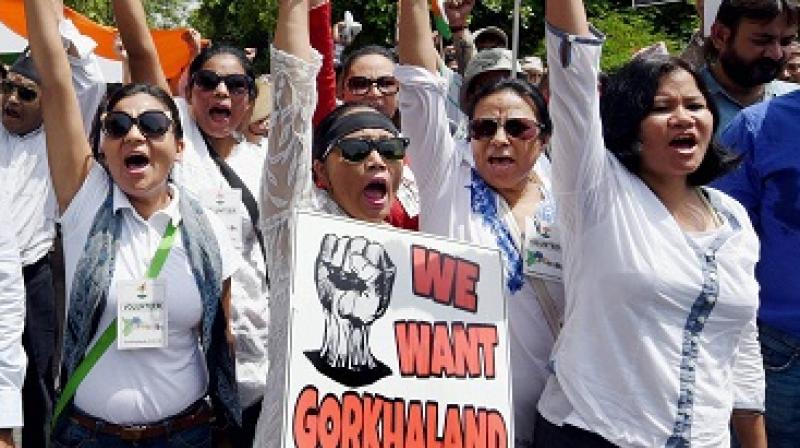 The GLA, the posters said, could go to “any extent” to achieve its “dream” of a separate state and claimed that the outfit was not affiliated to any political party. (Photo: PTI)

Darjeeling: The Gorkhaland Liberation Army (GLA) on Thursday claimed responsibility for the IED explosion, which occurred near the gate of the PWD bungalow in Darjeeling’s Mirik sub-division on Wednesday night.

GLA posters too surfaced for the first time on Thursday in the Hills since the indefinite shutdown was announced by the Gorkha Janmukti Morcha (GJM).

The shutdown over the demand for a separate state of Gorkhaland entered its 85th day on Thursday.

The blast occurred last night, two days after shops and markets opened in the Mirik and Kurseong sub-divisions. A few shops in Mirik were opened in the morning, but they downed shutters by afternoon. Subsequently, the GLA claimed responsibility for the blast and warned of an “armed struggle” if the political parties settled for “anything less than Gorkhaland”.

Posters of GLA saying “Gorkhaland Birodhi Hoshiyar” (Those opposed to Gorkhaland, be careful) were pasted on houses and shops at Mirik.

The GLA, the posters said, could go to “any extent” to achieve its “dream” of a separate state and claimed that the outfit was not affiliated to any political party.

“We will spare no traitors, be it the GNLF, JAP, TMC or GJM. We will be forced to bomb the house of any politician who attempts to compromise on Gorkhaland,” the posters said.

“The posters were hand-written in Nepalese. They claimed that the GLA was responsible for last night’s blast in Mirik. We are looking into the matter,” inspector-general of police, Darjeeling range, Manoj Verma, told PTI.

“The GJM will not take part in the September 12 talks with the state government if the issue of Gorkhaland is not discussed. We have already sent a delegation to Delhi to talk to the Union home minister regarding our demands,” he said in the audio clip.

The search operation to trace Gurung, against whom cases have been lodged under the Unlawful Activities (Prevention) Act (UAPA), continued in the Darjeeling Hills and adjoining areas.

An arrest warrant was on Wednesday issued by the Darjeeling chief judicial magistrate against the GJM chief and seven others for their alleged involvement in violence and arson in Darjeeling on June 8.

Peace rallies were taken out at certain parts of the Hills during the day, but they failed to convince the shopkeepers to open their shops and business establishments.

Picketing by GJM supporters was strengthened in some areas and posters and leaflets were distributed in support of the strike.

Internet services remained suspended in the Hills since June 18.