No entry for cut money-tainted leaders into BJP: Kailash Vijayvargiya

The BJP also said it would not turn into a “replica” of the ruling Trinamul Congress (TMC) in West Bengal. 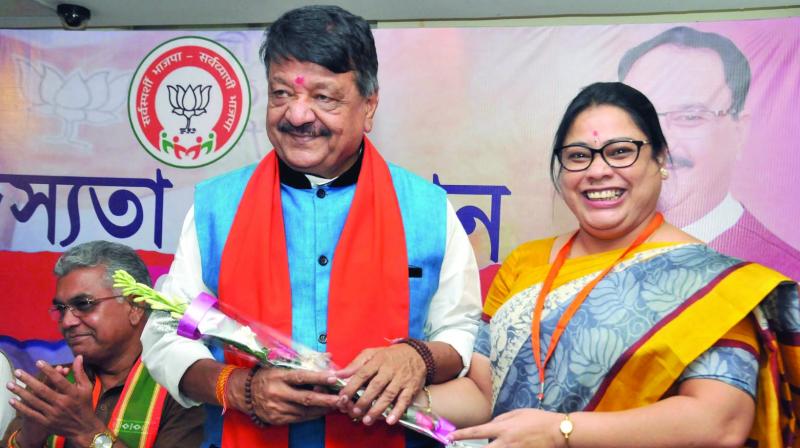 Kolkata: Amid resentment in a section of the West Bengal BJP over induction of TMC leaders, the saffron party on Sunday said those involved in collecting "cut" money from people would not be allowed to join it.

The BJP also said it would not turn into a “replica” of the ruling Trinamul Congress (TMC) in West Bengal.

“The BJP is a party with a difference. Several TMC leaders, ministers and MPs are in touch with us. They want to get into the party. But we want to make one thing clear, those involved in the cut-money scam will not be inducted in our party," Bharatiya Janata Party (BJP) national general secretary Kailash Vijayvargiya said here.

Mr Vijayvargiya, the BJP in-charge of West Bengal, said this during a meeting with the party's MPs and MLAs from the state.

His views were echoed by BJP national secretary Rahul Sinha, who said those involved in any financial scam would not get admission in the party.

“We will not turn into a replica of the TMC. We will not induct anyone involved in any financial scam. The people of West Bengal are looking at us and we have to work in that direction,” he said at the meeting.

Speaking at BJP's membership drive event here, Vijayvargiya said, “I got a call from California from an association of Bengalis and they said they do not want to invite Chief Minister of West Bengal this time because due to her and her party members, Bengal's prestige is hurt. The violence that took place during the polls has done damage to the prestige of the state.”

The statements of the senior BJP leaders came at a time when the elected representatives of the TMC at the municipal and panchayat levels are facing public ire over the issue of returning “cut” money.

BJP sources said party chief Amit Shah had instructed the state leadership to tread cautiously while inducting new members and check the background of a person before bringing him into the party-fold.

Since the Lok Sabha poll results, six TMC legislators and an MLA each from the Congress and the Communist Party of India (Marxist) have joined the saffron camp.

The BJP has also formed a screening committee comprising its state president Dilip Ghosh, state general secretary Subrata Chatterjee, Vijayvargiya and Mukul Roy to take a call on who should be inducted in the party.

Following protests by the people, several TMC leaders have returned lakhs of rupees taken as "cut" money from hundreds of beneficiaries of government schemes.

During Sunday's meeting, Vjayvargiya also set a membership target of one crore for the state leadership.

“One of the reasons behind the BJP returning to power (at the Centre) with over 300 seats is that we have 10 crore party members across the country. So if we want to form the next government, we should have one crore party members,” he said.

Mr Ghosh alleged at the meeting that party workers were being killed in various parts of the state every day.

“The Lok Sabha poll victory is dedicated to all those workers who were killed. We would not have witnessed this day without the sacrifices made by our workers,” he said.