Banerjee said that while her government has set up 23 new universities in the past seven years, another 11 will come up soon. 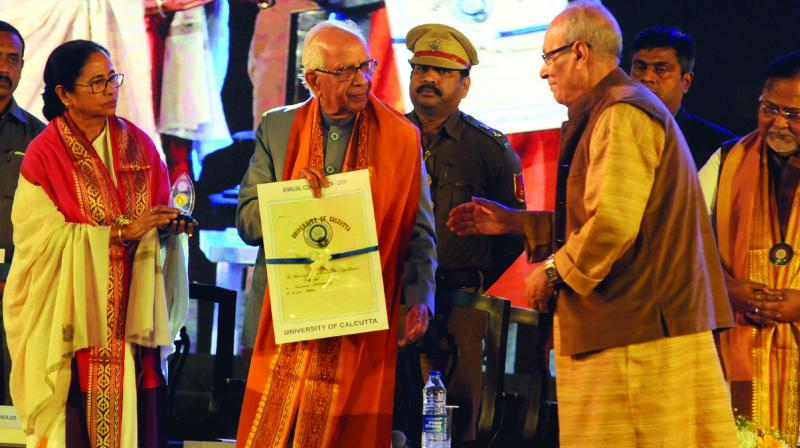 Kolkata: Announcing the decision to extend the retirement age of college and university professors from 62 to 65 years, West Bengal chief minister Mamata Banerjee said on Monday the move was aimed to utilise their services for a longer period.

Addressing the convocation of Calcutta University at state-run Nazrul Manch here, Ms Banerjee said: “If someone’s life doesn’t end at 60-62 what will he or she do for another 25 years?”

She said her government has taken the decision to raise the retirement age of professors from 62 to 65 years and vice-chancellors from 65 to 70 years.

The chief minister said that as part of the move to empower girls, the government would lay the foundation of “Kanyashree University” on January 10 in Nadia district. She said “Kanyashree,” the cash-transfer programme to curb child marriage and help girl students stay in school, has now been extended to all girls in the state.

Ms Banerjee said that while her government has set up 23 new universities in the past seven years, another 11 will come up soon. The CM also said that the government has spent Rs 28,000 crore to create infrastructure facilities in the state, including a medical hub and a lot more employment opportunities were being created.

On Calcutta University, she recalled that Rs 100 crore had been granted by the state government in the past for achieving excellence in innovative research. Ms Banerjee recalled her conferment of honorary D. Litt at last year’s convocation at CU.

“I get invites from various places — from Oxford, Cambridge and many other universities in the world but I can’t go always. CU seems to be my own home always as you never divide people along class lines. You are not an elitist institution,” she said.

She said there will be chairs after Iswarchandra Vidyasagar and Mahatma Gandhi in the university soon.