This is the first time that the TMC has hired professional assistance for its political survival since it came to power in the state in 2011. 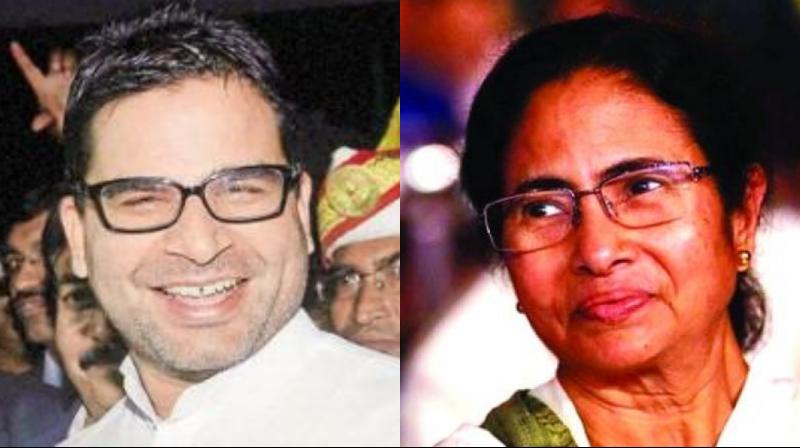 Kolkata: Desperate to save her green bastion from the BJP in West Bengal in the coming Assembly elections in 2021, Trinamul Congress supremo Mamata Banerjee has roped in political strategist Prashant Kishor, the architect behind Prime Minister Narendra Modi’s sweeping 2014 victory at the Centre and many other leaders in their states in the past couple of years, to redesign her party’s electoral formula in wake of the drubbing by the saffron party in the Lok Sabha polls. On Thursday afternoon, Mr Kishor met the chief minister at Nabanna, the state secretariat. Their discussion lasted around two hours, and sources said he has agreed to work with her for the next two years, adding that a deal has been finalised. Two-time Trinamul MP of Diamond Harbour Abhishek Banerjee, the CM’s nephew, was also present at the meeting that started at around 3 pm. Both sides are, however, tightlipped on the tieup.

Sources indicated Mr Kishor and his advocacy group Indian Political Action Committee (I-PAC) are camping in the state and are likely to start working from Friday. This is the first time that the Trinamul Congress has hired professional assistance for its political survival since it came to power in the state in 2011. Sources said that Mr Kishor was contacted and invited by Mr Banerjee to the meeting after he helped YSR Congress president Jagan Mohan Reddy to defeat TDP supremo N. Chandrababu Naidu, a known ally of Ms Banerjee, in the recent Andhra Pradesh Assembly polls.

After helping Mr Modi come to power for the first time at the Centre, Mr Kishor also played an instrumental role behind JD(U) leader Nitish Kumar becoming chief minister in Bihar in 2015 and Congress leader Amarinder Singh in Punjab in 2017.

The Trinamul Congress, which has been reduced to only 22 Lok Sabha seats in the state from 34 earlier, has also been found lagging in 128 Assembly seats out of 294 in the face of a massive saffron storm in post-poll analysis, which sent alarm bells ringing at 30B Harish Chatterjee Street in Kalighat, forcing the party to look for a key adviser who will work silently to plug the loopholes. Trinamul insiders, however, underlined that Mr Kishor’s immediate task will be to work closely with party leaders and devise a strategy for the municipal elections, which is due in the state next year.