The division bench held that the police would cooperate when the candidates would file their nominations. 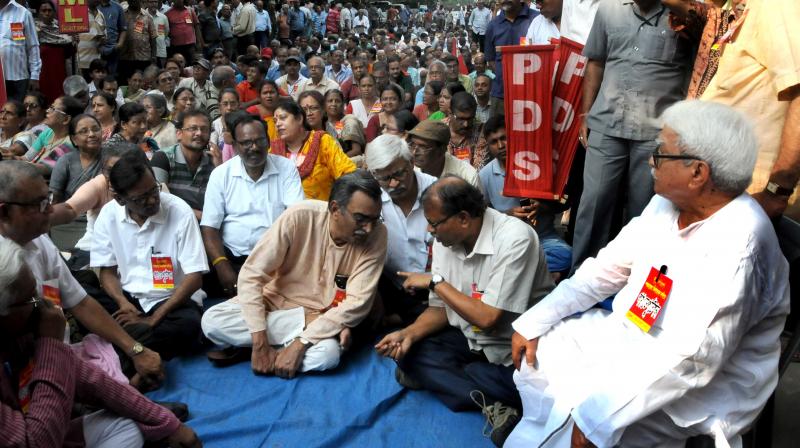 Left Front leaders (right) and supporters during a demonstration in front of the state election commissioner’s office on in Kolkata on Friday, protesting against the violence during the panchayat election nomination filing. They also demanded that the election date be shifted from May 1, as it is observed as International Workers’ Day. (Photo: Abhijit Mukherjee)

Kolkata: The Calcutta high court has ordered the superintendent of police (SP) of every district to ensure adequate security arrangements for the candidates to file their nominations, without any fear, to contest for state panchayat elections.

Seeking to know the steps to tackle violence ahead of the polls it has also directed the West Bengal State Election Commission (WBSEC) to submit its affidavit about its measures within next ten days.

The high court’s ruling came on Friday following a writ petition by the state Congress alleging rampant attacks on the Opposition parties’ candidates by the ruling Trinamul Congress workers in the districts.

State Congress president Adhir Ranjan Choudhury himself filed the petition on Thursday before the division bench of acting chief justice Jyotirmoy Bhattacharya and justice Arijit Banerjee due to an ongoing ceasework by the lawyers at the high court.

In his submission Mr Choudhury, also a Congress MP of Berhampore, pressed for the central para-military forces’ deployment to ensure free and fair polls. State poll panel’s secretary Nilanjan Shandilya and its joint commissioner Santanu Mukherjee were present with additional director general (law and order) Anuj Sharma during the hearing. Appearing for the state poll panel Mr Shandilya questionned the validity of the petition since the poll schedule has been declared.

When the division bench noted that the petition was not meant to halt the polls and wanted to know the state poll panel’s stand, Mr Shandilya submitted that steps have been taken upon receiving complaints by either any party or candidate. He reasoned that candidates from the ruling and opposition parties have been filing nominations while pointing out that the number of nominations filed by the Opposition parties’ candidates have so far been higher than that of the ruling party’s candidates.

After hearing both sides, the division bench instructed the SPs to make security arrangements to allow all candidates to file their nominations freely. It asked the WBSEC to file its affidavit, containing the figure of force deployment, number of sensitive and highly senstive booths among others, by April 16. The next hearing in the case will be held on April 20.

Expressing satisfaction on the high court’s ruling Mr Choufhury said, “I am happy. The division bench held that the police would cooperate when the candidates would file their nominations. We are blessed by this order. Half of the period for the polls have passed. We know the Trinamool would win because 50 per cent of the seats are reserved for the women.”