During the demonstration, BJP activists were carrying placards against the state government condemning the violence. 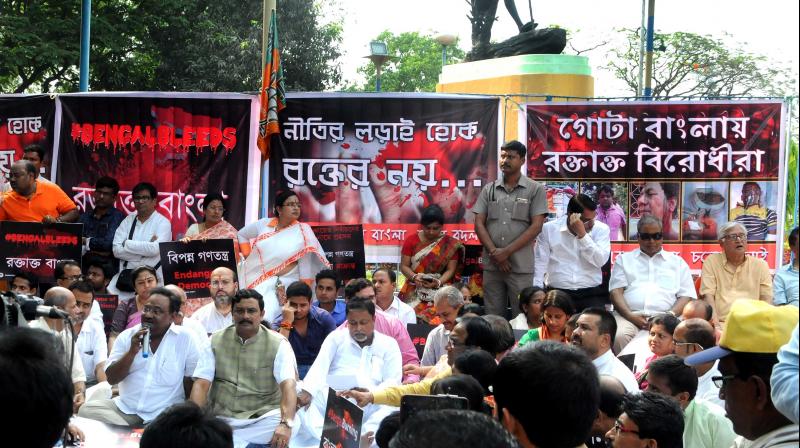 State BJP leaders and supporters at a sit-in demonstration, against the violence during the filing of nominations for the panchayat polls, in front of Gandhi statue on Mayo Road in Kolkata on Friday. (Photo: Asian Age)

Kolkata: The West Bengal BJP on Friday organised a sit-in demonstration here in protest against the continuing violence over filing of nomination for the panchayat polls.

Senior BJP leader Mukul Roy and BJP national secretary Rahul Sinha along with other party leaders organised the sit in demonstration in front of Mahatma Gandhi’s statue at Mayo Road area in the city.

“The Trinamool Congress has turned the panchayat elections into a farce in the state. The TMC is not allowing others to file nominations,” Mr Roy said.

The entire state is bleeding and both the State Election Commission (SEC) and the police administration are mute spectators. The police is acting like cadres of the TMC, Mr Roy said.

During the demonstration, BJP activists were carrying placards against the state government condemning the violence.

Mr Roy urged the workers of the opposition CPI(M) and the Congress to leave their party and join the BJP if they are serious about fighting against the alleged misrule of the TMC.

“Both the Congress and the CPI(M) are spent forces in Bengal. They don’t have the strength to fight against the TMC’s misrule. The workers of BJP and CPI(M) should join the BJP if they are serious about fighting TMC,” Mr Roy said.

While addressing the agitation programme, Rahul Sinha said the BJP won’t leave a single inch to the TMC without putting up a fight. The protest comes in the backdrop of widespread violence across the state over filing of nominations. There have been several incidents of clashes between the BJP and the TMC supporters in various parts of the state.

A state BJP delegation will, on Friday, meet the SEC to complain about the ongoing violence in the state, party sources said.

TMC secretary general Partha Chatterjee dubbed the allegations as baseless. “The BJP is trying to disturb the peace and stability of the state by flaring up communal violence and bringing in outsiders to create trouble during the panchayat polls,” Mr Chatterjee said. Panchayat polls will be held in the state in the first week of May.