‘Vision is to make 200-MW solar power in airport’

AAI has entered into an agreement with private power utility CESC (DISCOM) for supplying excess power to the grid. 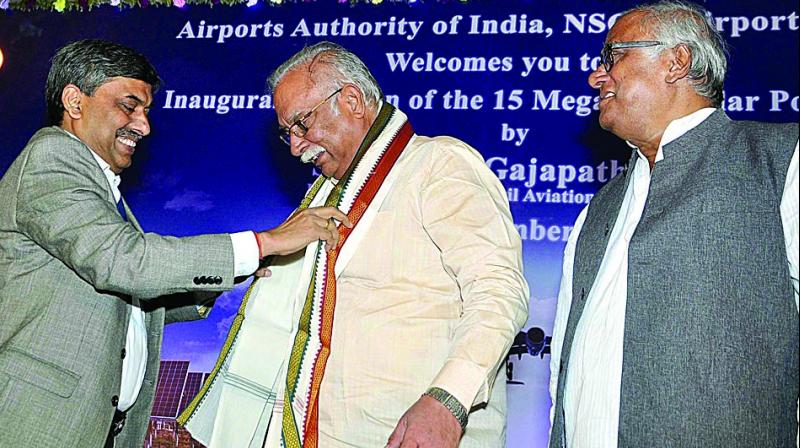 Kolkata: The civil aviation ministry is envisioning to generate 200-MW of solar power at airports in the country, as a part of the initiative to go green.

The target is to achieve the 200 MW in five to six years across the Airports Authority of India (AAI) airports, civil aviation minister Ashok Gajapathi Raju said.

Mr Raju was in the city on Tuesday to inaugurate the commissioning of 15-MW solar power generation at the Netaji Subhas Chandra Bose International Airport.

“With the commissioning of 15 MW power generation here, total generating capacity from this clean energy route has gone up to 90 MW at the AAI-operated airports,” he said.

The minister said in order to reach the goal of 200-MW solar power, the state governments would have to be convinced to accept net-metering by way of giving solar credits.

“Somehow, we have not been able to convince the state governments in this regard so far. God willing, we will be successful,” he said. Total solar power generation in private airports currently stands at 45 MW, Mr Raju said.

AAI has entered into an agreement with private power utility CESC (DISCOM) for supplying excess power to the grid.

This is called ‘net metering benefit’ and AAI has obtained permission from the West Bengal Electricity Regulatory Commission for it, AAI officials said.

Kolkata airport director Atul Dikshit said the gestation period of the project, built at Rs 90 crore, was six years after which revenue would accrue to the AAI.