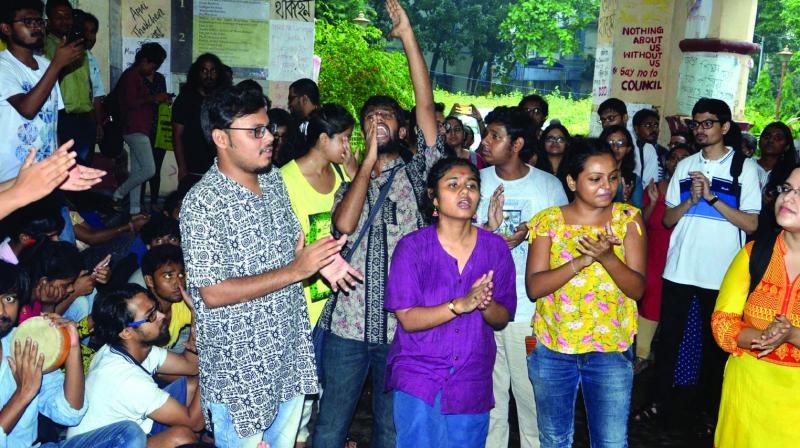 Kolkata: The gherao of Jadavpur University vice-chancellor Suranjan Das and other executive committee members has been continuing for over 24 hours now, as a section of a students’ union protest against the varsity’s move to scrap admission tests for six humanities subjects.

The university on Wednesday announced that it would admit undergraduate students in English, Comparative Literature, Bengali, History, Political Science and Philosophy only on the basis of board marks, reversing its last week’s decision to hold entrance tests. The move led to fresh turmoil in the varsity, with members of the Arts Faculty Students’ Union (AFSU) staging a sit-in before the offices of Das and other executive panel officials since 6 pm on Wednesday.

Criticising the executive council’s decision, a spokesman of Jadavpur University Teachers’ Association (JUTA) told PTI that it will observe ceasework on Friday, as well as a three-hour sit-in.

Explaining the reason behind the ceasework, the JUTA spokesman said admitting students based on their marks may “lower the academic standard” of the JU arts faculty. “We will have to admit candidates without proper evaluation of their writing abilities. This is a departure from the JU’s time-tested procedure,” he said.