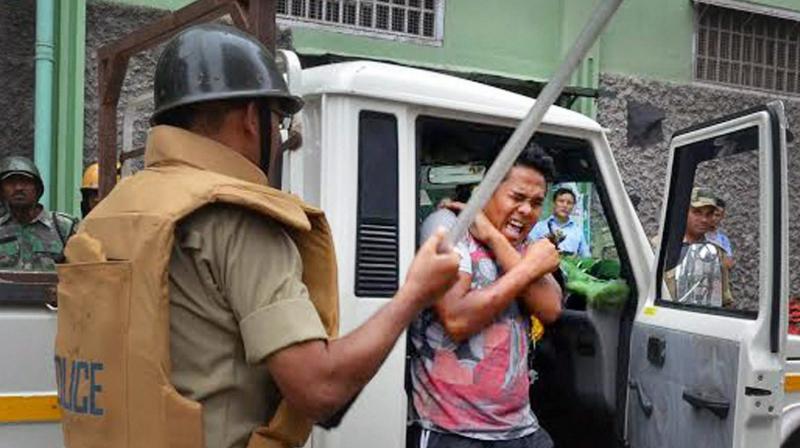 A police officer charges a car driver during a protest at Kalimpong in West Bengal on Wednesday. ( Photo: PTI)

Darjeeling: Gorkha Janmukti Morcha (GJM) activists clashed with the police in Kalimpong district on Wednesday as the indefinite shutdown in the Darjeeling hills entered the 21st day.

On June 17, GJM activists had clashed with police in Singhmari area here in which one of them was killed.

Wednesday’s clash was triggered by pelting of stones and bottles at the police by GJM youth supporters who were participating in a rally in support of a Gorkhaland state, forcing the police to fire teargas and use batons to disperse the rallyists.

A ticket counter of the North Bengal State Transport Corporation was also set ablaze by GJM activists in Kalimpong.

Reacting to Tamang’s claim, ADG (law and order) Anuj Sharma said, “The allegation of police firing is completely baseless. The police didn’t fire a single shot. We have no reports of firing.”

“The GJM took out a rally here and all of a sudden they started pelting us with stones and bottles. We had to use force to disperse the mob. The situation in the area is tense but is under control. The police and central forces are patrolling the streets,” a senior police official of Kalimpong said.

Kalimpong, which was earlier a sub-division of Darjeeling, was declared a full-fledged state in February. Kalimpong is about 55 km from Darjeeling.

Earlier on Wednesday morning, GJM supporters hurled petrol bombs at a Trinamul Congress party office in Kalimpong. Firefighters were immediately called in, but by the time they arrived the ground floor of the party office had already been gutted completely.

Meanwhile, all eyes are now focused on an all-party meeting slated for Thursday in Darjeeling to decide the next course of action, even as dwindling food supply has put hill residents in a precarious situation with the prospect of a severe food shortage staring at them.

The GJM and other hill parties remained tight-lipped about Thursday’s meeting.

In Darjeeling, Gorkha Janmukti Yuva Morcha supporters took out a rally at Chowkbazar with traditional “khukri” shouting slogans in support of a separate state.

While Internet service remained suspended for the 18th consecutive day, the police and security forces patrolled the streets of the hills and kept a tight vigil at the entry and exit routes.

Except pharmacy, all other shops, restaurants, hotels, schools and colleges remained closed. Boarding schools also extended their vacation because of the unrest.

GJM supremo Bimal Gurung had said on Tuesday that the indefinite shutdown was the final battle cry for Gorkhaland. Ruling out any compromise formula, he said that talks could only be held if the agenda was Gorkhaland.