The body has been chemically preserved for about 3 years, suspectedly by her son. 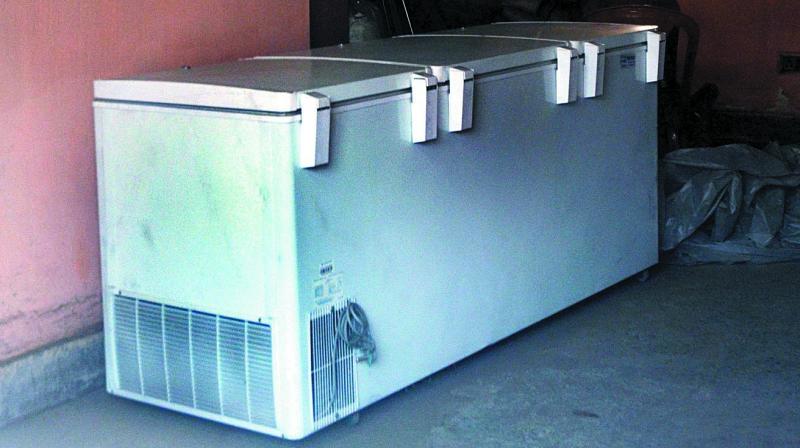 The freezer in which the body of Bina Mazumder was kept allegedly by her son to avail her pension by using her thumb impression. (Photo: Asian Age)

Kolkata: The Kolkata police has recovered the body of an old woman from a freezer and well preserved for about three years using chemicals, suspectedly by her jobless son to cash in her pension by taking her thumb impression.

The bizzare episode was discovered at a residence in the southern part of the city’s Behala area. The body of Beena Majumdar was recovered from inside a freezer, meant to keep meat, a senior police officer said on Thursday.

Her son, Subhabrata Majumdar, in his early 50s, has been detained and the police was questioning him and the woman’s husband, octogenarian Gopal Chandra Majumdar, he said.

The police began a search for the woman after receiving a call on Wednesday from a journalist, who had gone to the locality to squeeze out a story when area residents alerted him sensing something was wrong with the Majumdar family.

The neighbours knew the woman had died at a private hospital but were clueless about what happened to her body.

The police officer said the woman died nearly three years ago and her body was preserved inside a huge freezer in a locked room on the ground floor of the two-storeyed building. There were two freezers in the locked room.

The body of the woman was kept in one of the freezers, while the other was empty, the officer said, adding “we are looking for what purpose the second freezer was there.”

“The body of the woman was found cut open from her chest till the abdomen with the internal organs removed. It seems the body was embalmed by somebody and then kept inside the freezer. We are suspecting her son Subhabrata’s involvement in it. He has been detained and we are talking to him and his father,” the officer said.

The initial probe, a source in the Kolkata police said, revealed that though the woman died nearly three years ago, the family was withdrawing her pension every month without a miss.

Both Gopal Chandra Majumdar and Beena had worked with the Food Corporation of India and were drawing a decent amount as pension, he said. “Her finger impression was used to get the pension all these months. We are looking whether it was only for the pension that the body was preserved or there was something else behind the act,” the police officer said.

Police officials were also talking to the woman’s husband to get a picture of who and for what purpose the body was preserved.

Police insiders said Gopal Chandra Majumdar told them he had believed his son, who had promised him to bring back Beena to life. “There is discrepancy in the father’s version. We are verifying him and cross checking Gopal Chandra’s claims with that of his son’s. We are also talking to their neighbours and relatives,” the detective said. It seems the son, who had studied leather technology but was jobless for at least two years, was after the money.

“The son was jobless for quite some time and the money could have benefited him. We have found several medical journals and Subhabrata admitted reading them. It seems he used information on preservation of bodies from those books. It’s still not clear but we are grilling him to know the facts,” the investigating officer said.