Twenty persons have been injured in the accident. 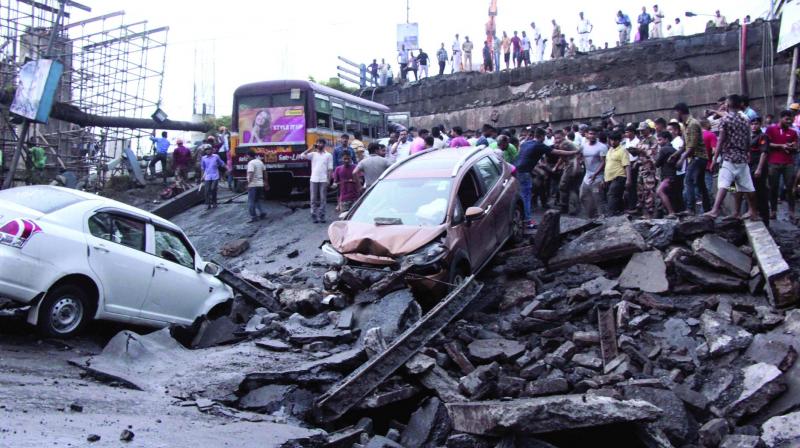 Rescuers work at the scene after a Majherhat Bridge at Taratola collapsed on a sewage canal in Kolkata on Tuesday. (Photo: Abhijit Mukherjee)

Kolkata: Two years after the under-construction Vivekananda Flyover’s collapse in north Kolkata claiming more than two dozen lives, another disaster struck the city on Tuesday afternoon when a portion of Majherhat Bridge at Taratola collapsed reviving the horror and exposing the lack of maintenance once again. While unconfirmed sources put the death toll at five, chief minister Mamata Banerjee confirmed the death of one person only. The toll, however, is feared to rise. Twenty persons have been injured in the accident.

Four teams of the National Disaster Response Force have been deployed in the search and rescue operation following a plea by the Mamata Banerjee government. Three columns of the Indian Army soldiers have also been put on stand-by mode, according to sources in the Eastern Command headquarters at the Fort William.

Expressing his grief over the accident, Prime Minister Narendra Modi tweeted, “The collapse of a part of a bridge in Kolkata is deeply unfortunate. My thoughts are with the families of the victims. I pray that those who are injured recover at the earliest.”

The ill-fated bridge passes over the circular railway network and a canal. A heavy downpour lashed the city barely an hour before the disaster, which took place at around 4.40 pm.

A minibus, five cars, including the one of a judge at a city court, and three two-wheelers were passing over the bridge. All the vehicles fell down as a large portion of the bridge got dislodged. With a deafening sound the collapsed part fell diagonally into the canal and on some huts where a group of construction workers were putting up for the nearby Joka-BBD Bag Metro railway project. Several people fell trapped.

A signal post on the railway track was also damaged. Kolkata Police commissioner Rajeev Kumar and other officers rushed to the spot with large contingent of police personnel. Kolkata Mayor and fire and emergency services Sovan Chatterjee also visited the spot. The fire brigade, disaster management group and civil defence personnel jumped to the search and rescue operations.

According to the Kolkata Police, 21 injured persons were rescued. Among them 11 were admitted to SSKM Hospital while 10 others at CMRI. Later one of the injured, Soumen Bag of Sealpara in Behala, died at SSKM Hospital. But the rescue personnel suspect of more people still lying trapped under the collapsed portion. A survivor, Sisir Chakraborty, recalled, “I was reading a magazine while travelling in my car.”

He said, “Suddenly I felt a massive jerk before finding a long queue of cars ahead of mine. People were running away in panic. Some of them said the bridge has collapsed. What I realised was that a block of the bridge which is above a slum caved in.” Chief minister Mamata Banerjee who was in Darjeeling on an official visit ordered a probe into the accident. She is returning to Kolkata on Wednesday morning.

She said, “There is a report of one person’s death. Even a single death is unfortunate. I am monitoring the situation. I have asked the administration to take necessary steps for the search and rescue operation. No one wants an accident. A detailed probe will certainly be conducted to know how it happened and why. Right steps will be taken. If negligence is found, action will be taken.”

Ms Banerjee explained, “Criminal action will be taken if anyone is found guilty. I have asked the police to report back to me about the developments time to time. Although I am here, my heart is there. None of us wants to stay here anymore. But there is no flight available now. Also it takes around 4 hours to reach Siliguri from here. So I will return tomorrow.”