Mamata Banerjee warmly put her arm around Ms Jahan’s shoulder before the prayers. 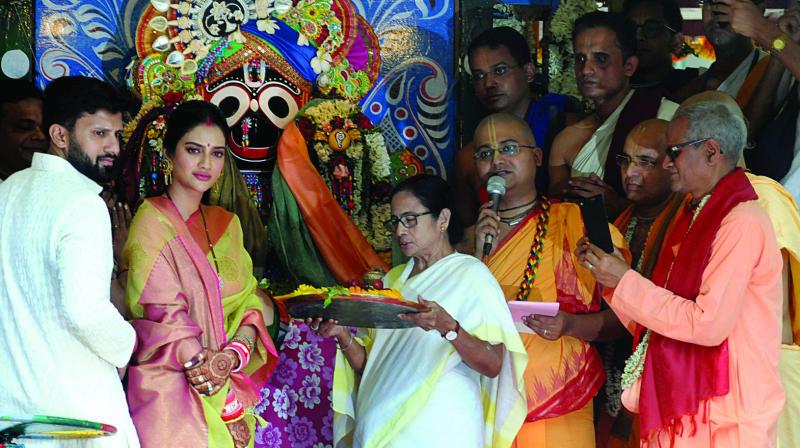 Kolkata: In a gesture loaded with symbolism, TMC supremo Mamata Banerjee Thursday attended an ISKON Rathyatra festival with the party's Muslim woman MP Nusrat Jahan, trolled by radicals for wearing emblems of Hindu matrimony, and called for “togetherness and tolerance for all faiths”.

Panned by the BJP over “Muslim appeasement”, Ms Banerjee attended the elaborate ceremony with Ms Jahan, actor-turned-TMC lawmaker from Basirhat, where they performed Hindu rituals, including pulling the chariot of Lord Jagannath.

Days after a radical Muslim cleric of Saharanpur criticised Jahan for marrying a Hindu and wearing “sindoor”, a Hindu symbol of matrimony, calling it un-Islamic, Ms Jahan defiantly attended the ceremony with her businessman husband Nikhil Jain.

Looking resplendent in a lime green saree, red bangles, “mangalsutra” and vermilion, she participated in the aarti with her hudband, holding coconuts in hand.

Ms Banerjee warmly put her arm around Ms Jahan’s shoulder before the prayers. “Togetherness and tolerance for all faiths is the real religion,” Ms Banerjee said.

Urging people to embrace peace and unity, she wished well for everyone and chanted “Jai Jagannath”, “Jai Hind” and “Jai Bangla” before the chariot-pulling ceremony commenced from the Albert Road centre of the International Society for Krishna Consciousness.