The bench said that it is expected that the SEC shall redeem itself by taking a note of the observations made in its order as a wake-up call. 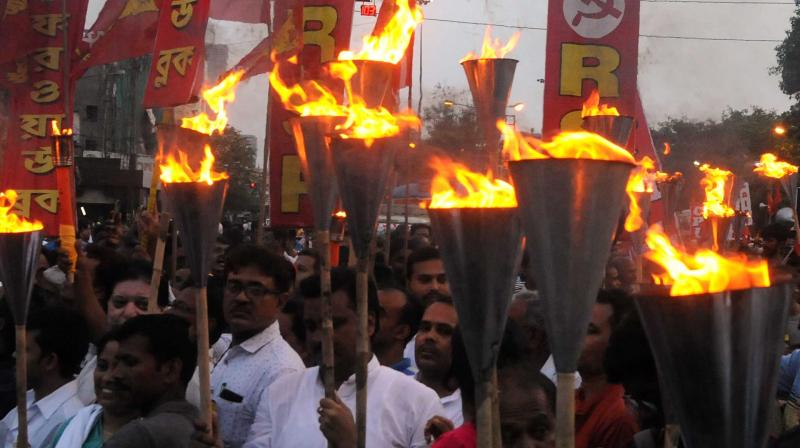 Left parties take out a torch rally from Lenin statue to Sealdah on Friday, demanding fair and peaceful panchayat polls in the state. (Photo: Abhijit Mukherjee)

Kolkata: Making scathing observations on State Election Commission’s (SEC) neutrality in the West Bengal panchayat elections, Calcutta high court asked it to consider those as a wake-up call, but refused to interfere in the poll schedule announced by it.

A division bench comprising Justices B. Somadder and A. Mukherjee, observed that the SEC should conduct itself in a manner, which demonstrates its aim of maintaining absolute neutrality, fairness and transparency during the poll process.

The bench said that it is expected that the SEC shall redeem itself by taking a note of the observations made in its order as a wake-up call.

The division bench refused to interfere in a single bench order that does not intend to interrupt the electoral exercise further nor intervene by passing any direction in this petition.

Petitioner Ritzu Ghosal, general secretary of West Bengal unit of Indian National Congress, had appealed before the division bench after Justice Subrata Talukdar refused to intervene and disposed of his application.

Since the issuance of the initial notification of the state government for the 2018 panchayat elections, the SEC “has acted in such a manner that eyebrows have been raised and accusatory fingers have been pointed against it time and again,” the bench observed.

Observing that its (SEC) neutrality has been questioned, the court said it has floundered, while performing its Constitutional obligation to uphold the democratic principles in a fair and transparent manner leading to a spate of litigations ever since the polls process was set to motion.

Opposition parties in the state, in a number of pleas before the HC, have accused the SEC of playing a partisan role. The ruling Trinamul Congress (TMC) opposed the petitions along with the commission.

The notification, dated April 26, for holding election on a single date without providing necessary clarification specially when three dates were announced in the previous notification dated March 31, has inevitably raised eyebrows and pointing of accusatory fingers at the commission, which could have been easily avoided.

Stating that the commission has itself invited litigations after the election process has commenced, the bench said, “Instead, it ought to have allayed the fears of all stakeholders, and above all, the voters, who repose complete faith and trust on this august Constitutional body.”

Gaining their confidence, therefore, is the SEC’s duty before, during and after the poll process commences, the court said.