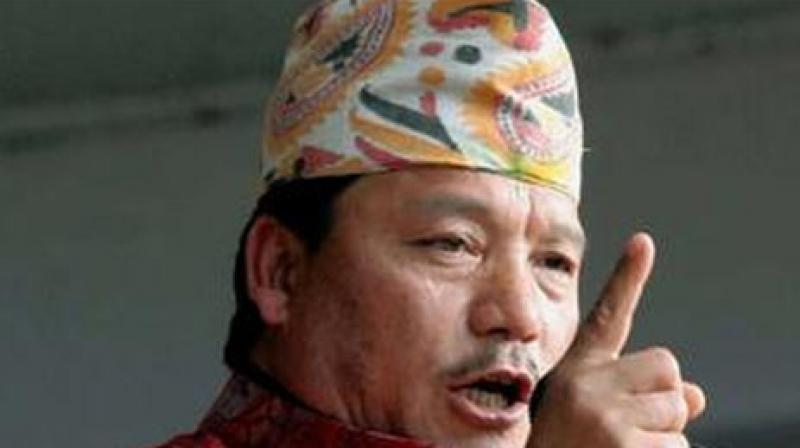 Kolkata: Another improvised explosive device (IED) blast took place in Darjeeling early on Sunday as absconding Gorkha Janmukti Morcha (GJM) chief Bimal Gurung has threatened in a video clip from an undisclosed location of a violent battle for Gorkhaland. This time also the IED blast was carried out at a police outpost in Chhoy Mile area in Rangli Rangliot.

Although no one was injured in the explosion, the impact of the blast created deep craters inside the out-post. Some police documents were burnt. spilinters were found also at the spot. The police has initiated a case on the charges of the Unlawful Activties (Prevention) Act. Three persons were questionned by the police.

A group of four persons is believed to have carried out the blast. The needle of suspicion is on the GJM. A local resident said that he woke to the defeaning sound after mid-night and assumed it to be thunder-storm before coming out of home only to realise it was an explosion. Earlier IED blasts took place at many places in the Hills including Darjeeling super market in the past three weeks.

In his video clip Mr Gurung spoke in Nepali making it clear that the movement would continue in the Hills and it would only intensify with violence under his leadership. Referring to his rival Binay Tamang and his aide Anit Thapa whom he expelled from the party Mr Gurung warned that those who played the role of traitors would not be spared.

He even declared that the ‘Gorkhaland Personnel’ would act on his command. Meanwhile state BJP president Dilip Ghosh claimed neither the GJM nor chief minister Mamata Banerjee want peace in Darjeeling. He however kept the door ajar for discussion.

During the day GJM central committee member Rohit Thapa was arrested by the police in Alipurduar on the charges of igniting violence on July 30.

He was caught from Subhashipally.  Significantly Mr Thapa was a member of the GJM-delegation which met chief minister Mamata Banerjee at the state secretariat: Nabanna on August 29 at the all-party discussion on peace in Darjeeling. He was also the president of the now-defunct GTA.

Meanwhile, the situation in Darjeeling remained tense as the indefinite shutdown in the Hills entered its 81st day on Sunday. A massive search operation launched by the West Bengal police for the absconding Gorkha Janmukti chief Bimal Gurung continued even on Sunday.

Since Friday, the police were combing Darjeeling Hills and its adjoining areas for Mr Gurung, against whom a lookout notice had been issued for his alleged involvement in various cases, including a bomb blast in Kalimpong police station in which a civic volunteer was killed.

There are also cases under the Unlawful Activities (Prevention) Act against him. Protests by pro-Gorkhaland supporters demanding continuation of the shutdown and a separate state of Gorkhaland were organised in various parts of the hills. Rallies were taken out in Darjeeling, Kurseong, Mirik, Sonada and Kalimpong.

Picketing by GJM supporters has been strengthened in several parts of the hills and posters and leaflets were distributed in support of the shutdown. Barring medicine shops and hospitals, all the shops, business establishments, schools and colleges remained closed.

The shutdown in the hills is on after Mr Gurung revoked party convenor Binay Tamang’s decision of suspending it till September 12, when the next round of dialogue with the state government is scheduled.

The GJM chief had also expelled Mr Tamang on Friday on the charge of “violating the party line and indulging in anti-party activities”. The police and security forces maintained a strict vigil in order to avoid any untoward incident.