Banerjee said all efforts of the BJP would be foiled and it would not be able to fulfil its electoral expectations here. 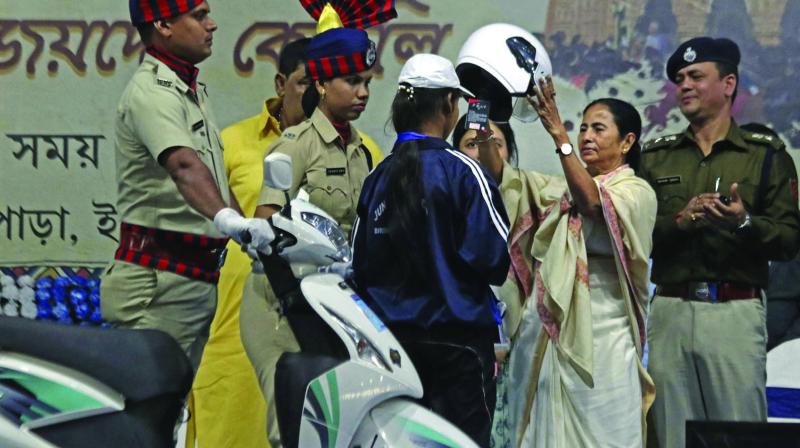 CM Mamata Banerjee presents a helmet during a development programme in Birbhum on Thursday. (Photo: PTI)

Ilambazar (WB): West Bengal Chief Minister Mamata Banerjee on Thursday slammed Prime Minister Narendra Modi, saying he should refrain from teaching the state democracy when his government had “curbed” the democratic rights of the people.

Her comment came in the backdrop of a January 1 Prime Minister’s Office tweet, quoting Modi as saying, “What has happened in West Bengal. A political party (the BJP) is being denied a basic democratic right.”

“Our workers are brutally killed in West Bengal, Kerala, Karnataka. Politics of violence has to end. All parties have to reaffirm their commitment to peaceful politics: PM,” the PMO had tweeted.

West Bengal is the only place where democracy is maintained and well protected, Ms Banerjee said. “How dare he (Modi) teaches us democracy. All democratic rights have been curbed under his government. People’s rights have been taken away. Even comments on social networks are under scanner, and phone calls are being tapped,” Ms Banerjee said while addressing a public meeting here in Birbhum district.

The tweets of the PMO came in the backdrop of a January 1 interview of Mr Modi, which was broadcast by several TV channels. “His comment is absolutely wrong. Both peace and democracy prevails in Bengal to its maximum extent unlike in many other places,” she said.

The TMC leader accused the BJP of spreading canards against her government, dividing people on religious lines and trying to foment trouble in the state. Ms Banerjee said all efforts of the BJP would be foiled and it would not be able to fulfil its electoral expectations here. BJP leaders on several occasions have said West Bengal is a priority state for them and its president Amit Shah has set a target to win 22 Lok Sabha seats in Bengal in the 2019 elections.

“People have seen and learned a lot about what his (Modi) government is doing in the last few years. They will reply them in appropriate terms in the Lok Sabha elections next year,” the chief minister said.     — PTI