Will return ‘cut money’ if voted to power, says BJP

Mamata Banerjee had warned party leaders and said she does not want “thieves” in the TMC. 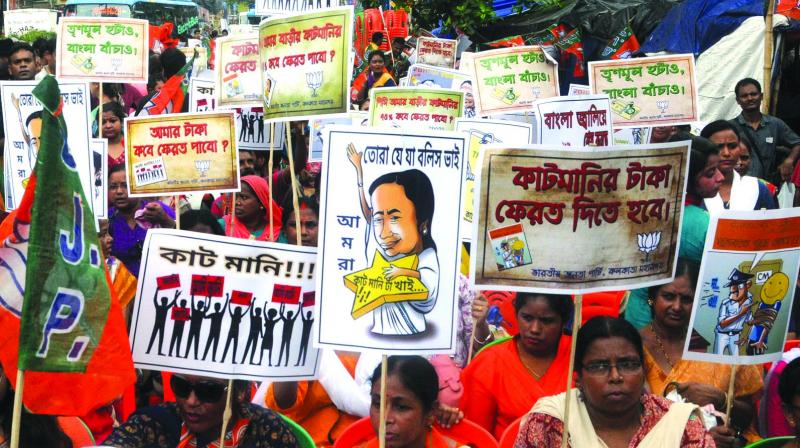 Kolkata: Hitting out at the ruling Trinamul Congress in West Bengal over the “cut money” issue, BJP said on Tuesday if voted to power it will seize properties of TMC leaders accused of taking such commissions and return the money to people.

At a rally in South Kolkata’s Hazra Road crossing, near chief minister Mamata Banerjee’s residence, state BJP leaders also raised questions about the increase in assets of some Trinamul members.

“If we are voted to power, we will seize the properties of those involved in taking cut money and return the money to the people from whom it was taken,” BJP state general secretary Sayantan Basu said.

Ms Banerjee, he said, has asked her party leaders and councillors to return 25 per cent cut money taken from the beneficiaries of the government schemes.

“But what about the rest of 75 per cent taken by the top TMC leaders? Who will return it?” Mr Basu asked.

“Most of the TMC leaders are saying they have given a big percentage to the party’s top leaders. What about that? The TMC supremo and her nephew (Abhishek Banerjee) should answer this,” he said.

At a meeting of TMC councillors last month, the chief minister had said, “Some leaders are claiming 25 per cent commission for providing housing grants to the poor. This should stop immediately. Return the money if any of you have taken it.”

She had warned party leaders and said she does not want “thieves” in the TMC. State BJP general secretary Raju Banerjee said “CM” stands for “cut money” and demanded an explanation from Ms Banerjee about the increase in the assets of top TMC leaders.

“If they (TMC leaders) don’t return the money before attending the party’s “martyrs’ day” rally then they will face public ire,” Mr Sinha threatened.

“Martyr’s day” or the “Shahid Diwas” rally is organised by the TMC every year on July 21 in the memory of 13 Youth Congress activists killed in police firing in 1993 when Ms Banerjee was its leader.

Following protests by the people against cut money, several lower and mid-level TMC leaders have returned lakhs of rupees taken as commission from thousands of beneficiaries of government schemes.