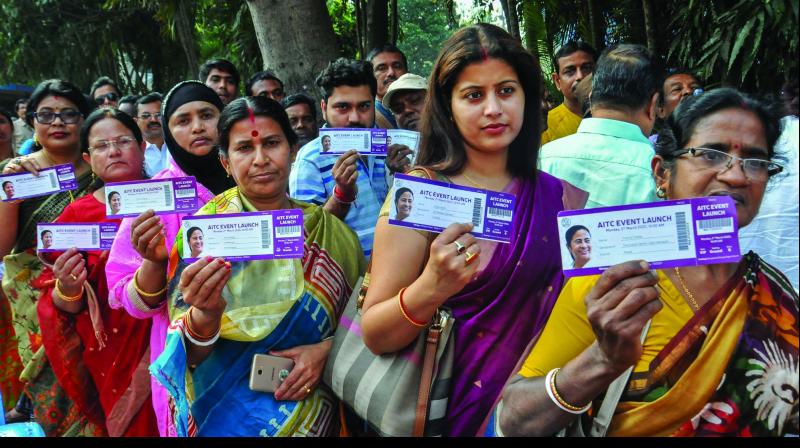 TMC workers stand in a queue as they show their IDs before the start of West Bengal chief minister Mamata Banerjees address during the launch of her partys campaign Banglar Garbo Mamata (Bengals Pride Mamata) in Kolkata ahead of the municipal and 2021 state Assembly elections on Monday. (Photo: PTI)

Kolkata: Breaking her silence, West Bengal chief minister Mamata Banerjee on Monday described the massacre during Delhi riots as a “state-sponsored planned genocide” and claimed an attempt was being made by the BJP to replicate the “Gujarat model of riots” across the country.

Launching her party’s new campaign — “Banglar Gorbo Mamata (Mamata is Bengal’s Pride)” — a day after “Aar Noi Annay” campaign of the BJP, the Trinamul Congress supremo announced of providing shelter to those who became homeless in the riot. “I think the way people were massacred in Delhi for the last few days is a planned genocide because it was state-sponsored. The Delhi Police comes under the Centre,” she said.

Ms Banerjee hit back at Mr Shah, who had expressed “anguish” over the law and order situation in Bengal at his Kolkata rally, demanding that the BJP apologise for the Delhi violence before lecturing others.

“Besides the Central Reserve Police Force and Central Industrial Security Force were also there. But all remained inactive. Later it was painted in communal colour. We condemn it. Why hasn’t the BJP apologised for the riot till date? They often come here to declare shamelessly to capture Bengal. The BJP has been trying to replicate the Gujarat model of riots across the country including Bengal,” She told the party workers.

“After the Gujarat riots in 2002, they did the same in Uttar Pradesh. This time it happened in Delhi.”

The chief minister also condemned those who raised the controversial “goli maro...” slogan while heading to home minister Amit Shah’s rally in the city on Sunday.

“I noticed some people were brought here on Sunday. I know where they live. We have identified them. The offence is an offence. What is illegal is illegal,” she said.

“They shouted ‘Goli Maaro’ slogans at a BJP rally in Kolkata in Delhi’s language. Who will shoot whom? The words are itself offensive and provocative, monstrous and illegal. So legal steps will be taken against each of those who uttered it. No one will be spared. If one is spared, five more will rise. It is Kolkata, not Delhi. They have to know who is gaddar (traitor). People will decide who are traitors,” she added.

Referring to Mr Shah’s prediction of winning the next Assembly election in the state with a two-third majority of votes, Ms Banerjee wondered why the BJP would restrict its target up to 200 seats out of a tally of 294 in the state.