Centre will take up data with Myanmar to tackle infiltration, says Rajnath. 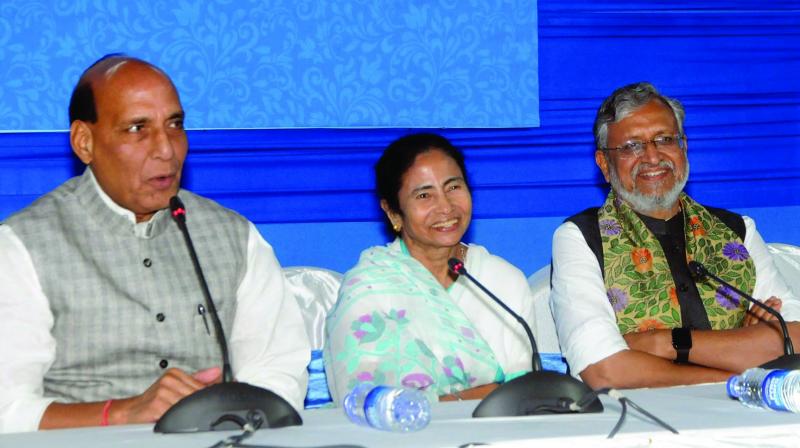 Kolkata: Union home minister Rajnath Singh on Monday informed that the states have been directed to collect the biometric details of the illegal migrants and send its reports to the Centre which will take up the data with Myanmar to tackle the Rohingyas infiltration in the country.

He also assured that the Modi government was taking all steps to curb terrorism and left wing extremism. However, Mr Singh’s silence on West Bengal chief minister Mamata Banerjee’s call to offer shelter to the Rohingyas in the state betrayed the BJP’s tirade against the Trinamul Congress rule. He expressed his gratitude to Ms Banerjee.

On Rohingya issue, the Union minister said, “A concerned advisory has been issued in this regard. All the states have been asked to identify them. And they have to take their biometrics also. After that they will have to send their reports to the central government which in turn will initiate take it up through diplomatic channels with the Myanmar government.”

Mr Singh elaborated, “Be it Maoism or extremism or terrorism whatever security theatres are there, the government is working properly in those theatres. Wherever challenges will come up, we are doing what is required to tackle them and we will do it.” He however parried questions on surgical strike’s celebrations tactfully.

“I did not use the term here. There is no need to go in details in many such issues and we should not go in them also,” he noted.

Showering lavish praise on Ms Banerjee Mr Singh mentioned, “The arrangement for this meeting was excellent. I express my gratitude to honourable chief minister of West Bengal Mamatadi for hosting such a beautiful meeting.”

Significantly only a day before a BJP delegation had complained to the union home minister at Raj Bhavan about “the political terrorism of TMC in state” and “about the torture on state BJP Yuva Morcha president Debit Sarkar in police custody at Islampur  following his arrival to the city.