People are in dark about GST, says Partha Chatterjee

“People associated with small and medium trade and the common people are left in the lurch,” he added. 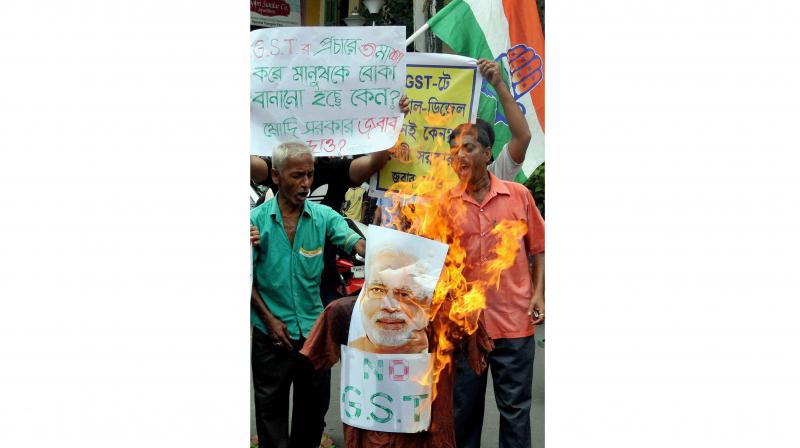 Kolkata: The Trinamul Congress is planning to launch a movement against Goods and Services Tax which they feel has robbed the common people of its independence. “Most of our party members are in the dark about GST and are trying to understand the things. We will ask Amit Mitra (finance minister) to take classes at the party level so that we are able to understand which are the things and areas whose prices have gone up or gone down due to GST. This will enable us to launch a campaign opposing this,” TMC secretary-general Partha Chatterjee said responding to a query on whether TMC will launch a movement against GST.

Mr Chatterjee on the sidelines of a programme at Calcutta University said that GST was implemented in a hurried manner even after chief minister Mamata Banerjee had raised her objections pertaining to some matters in GST. “Mr Mitra has written to the Centre on more than one occasions pointing out the things that needed to be sorted out before the roll out. They did not pay heed and in the same manner in which demonetisation was introduced, GST was implemented,” he said.

According to Mr Chatterjee, 50 lakh people associated with the textile business are on the brink of a disaster.

“People associated with small and medium trade and the common people are left in the lurch,” he added.

CPI(M) state secretary Surjya Kanta Mishra slammed the GST and said that the corporates will benefit and the commonman will suffer because of GST.

“The infrastructure, law and the technology for GST have not been put in place. Everything was done in a hurry. It will push the country to anarchy,” Mr Mishra said.

The Posta Bazaar Merchants’ Association (PBMA), one of the biggest trade unions in Burrabazar, that continued their third day strike against GST, complained that this tax structure will severely affect small and newly-started businesses as they will have to cough up an approximate amount of `20,000-`30,000 to hire an accountant to file their tax returns apart from paying rents for their establishments.