The police personnel tried to disperse the BJP supporters and followers of saffron party leader Mukul Roy that lead to a fight between bothsides. 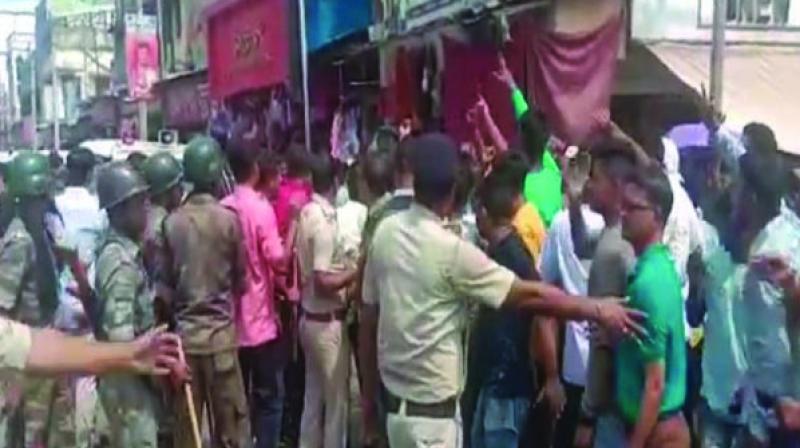 A scuffle broke out between the police and BJP supporters for raising the ‘Jai ShrI Ram’ chants, outside the residence of a Trinamul Congress leader in Kanchrapara on Saturday. (Photo: ANI)

Kolkata: BJP supporters were lathicharged by the police on Saturday after they chanted “Jai Shri Ram” slogan during a demonstration outside a property where TMC leaders were holding a meeting. TMC leaders had assembled in Kanchrapara in North 24 Parganas district to chalk out a strategy to retake party offices taken over allegedly by BJP workers.

State food supplies minister Jyotipriyo Mullick, who is also the Trinamul North 24 Parganas district president, was coming to the meeting along with fire and emergency services minister Sujit Bose and Baranagar MLA Tapas Roy, who are the members of the party’s newly formed damage control committee in wake of the party’s poor show in the Lok Sabha election.

When the meeting got underway to decide on how to recapture the Trinamul party offices, a group of BJP workers carrying flags and festoons started shouting “Jai Shri Ram” slogan during a demonstration at Gandhi More. The cops asked them to remain silent but they failed to overpower them. They were seen chasing them and lathicharging them on the road. Learning of the incident, Mr Mullick rushed to the spot but was greeted by the same slogan only.

The police personnel tried to disperse the BJP supporters and followers of saffron party leader Mukul Roy that lead to a fight between bothsides. Mr Mullick alleged, “They are barbaric. Let them demonstrate as much as they can. The CM rally will indeed happen here on June 14.” Referring to MLA Subhrangshu Roy, who recently joined the BJP following the footstep of his father Mukul Roy, he called him a “kid who is yet to see the future.”

Mr Basu said, “The Mamata Banerjee government was, is and will always be there. If someone thinks to do whatever they like, it would not be entertained, the police will take action.” Union minister of state for women and child development Deboshree Chowdhuri has slammed Ms Banerjee for her opposition to “Jai Shri Ram” slogan. She observed that Ms Banerjee was yet to accept the BJP’s massive rise in the state.