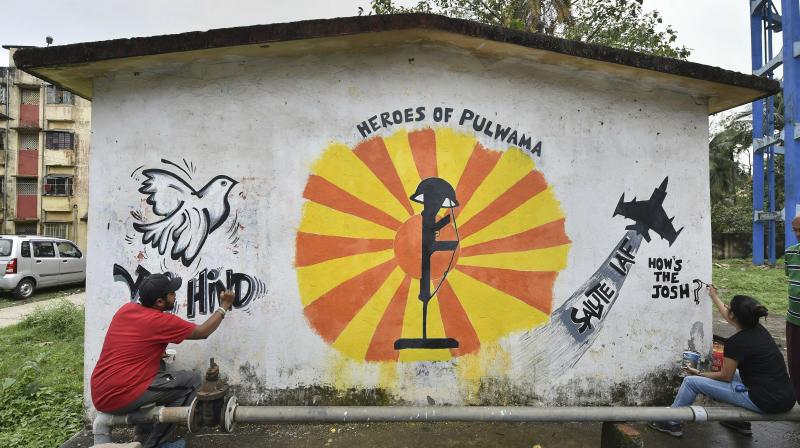 Youth paint a wall to depict IAF’s strike on Jaish-e-Mohammed’s biggest camp in Pakistan and pay tribute to the slain CRPF jawans of Pulwama terror attack in Kolkata. (Photo: PTI)

Kolkata: With patriotic fervour running high, the BJP in West Bengal has decided to hard sell the Modi government’s fight against terrorism, particularly its actions targeting Pakistan in the aftermath of the Pulwama suicide bombing, ahead of the Lok Sabha elections, party sources said.

A meeting of the party’s booth-level functionaries and state election committee members resolved to send party cadre to every household to flag the Modi government’s “political will” to teach Pakistan-backed outfits like Jaish-e-Mohammed “befitting lessons” for their acts of terrorism.

Speaking on condition of anonymity, sources said, state BJP chief Dilip Ghosh asked leaders and workers to fan out across West Bengal and appeal to the “partiotic and nationalistic” sentiments of people.

“No doubt it is a victory of our armed forces. But, at the same time, the political will of the Modi government also came into play. There is no harm in propagating about it,” a party leader quoted Mr Ghosh as having told the meeting.

Another leader said the meeting took note of the heightened sense of patriotism and nationalistic fervour prevailing in West Bengal like in other states.

“We have been asked by our leaders to propagate about how the Modi government has shown the political will and guts to fight back Pakistan and terror groups it is backing, and how the previous governments led by the Congress lacked that political will,” another state BJP leader said.

The state BJP leadership told the workers to strongly raise these issues while being unsparing in the criticism of West Bengal’s Trinamul Congress government for its “misrule”.

They have been asked to especially target TMC supremo and chief minister Mamata Banerjee for questioning the timing of the Pulwama terror attack and India’s strong response to it.

Ms Mamata had asked in the wake of the attack that claimed the lives of 40 CRPF troopers whether the government wanted to go to war with Pakistan when Lok Sabha elections were round the corner.