‘Distortion of history a terror of different nature’

Reason and debate have become the biggest casualties in the Sangh Parivar’s interpretation of history, the former professor rued. 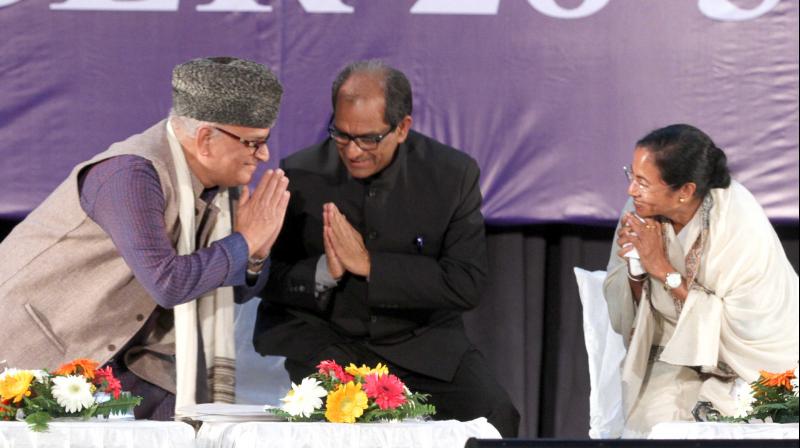 The uproar over Ayodha temple and the film, ‘Padamavati’, is aimed at consolidation of Hindu votes. (Photo: Abhijit Mukherjee)

Kolkata: Attempt made to “fabricate and distort history” is a terror of a different nature, general president of Indian History Congress K.M. Shrimali said, expressing concern over the shrinking space for reason and debate in the country.

The sole agenda behind the RSS-BJP trying to rewrite history is to create a Hindu nation, where minorities are treated as second-class citizens, he said.

“It is a matter of concern that the space for reason and debate is shrinking in India. We have never witnessed such a disturbing trend. Those with little knowledge about history are trying to fabricate and thrust their idea. It is a terror of a different nature,” the former history professor of Delhi University said.

The RSS and the BJP are determined to divide the nation on religious grounds, Mr Shrimali said, adding that history is a discipline of reason and cannot be written with fabricated truths, imagination or myth-making.

Reason and debate have become the biggest casualties in the Sangh Parivar’s interpretation of history, the former professor rued.

“There are ways of understanding mythology... Not everything which is part of mythology is history... But you don’t enter into arguments, you try to bully people. That’s not the way to write history,” he said.

The historian also explained that Hindutva and Hinduism are different concepts with the former being a political ideology.

Mr Shrimali said Hindutva is being used as a tool to access power. The uproar over Ayodha temple and the film, ‘Padamavati’, is aimed at consolidation of Hindu votes.

Reacting to a RSS-BJP criticism that a distorted version of history is being taught in India by the “Left and liberal historians”, Mr Shrimali said historians don’t need to take lessons on nationalism from those “who had surrendered before the British during the Independence movement”.

He also said that the party in power is trying to obliterate the contributions and legacies of the Mughal Empire. He, however, expressed confidence on the “functioning of the minds” of Indian people in their attempts to resist fabricated history.