They were posted at the Indian Army’s 33rd Corps headquartered in Sukna under the Eastern Command. 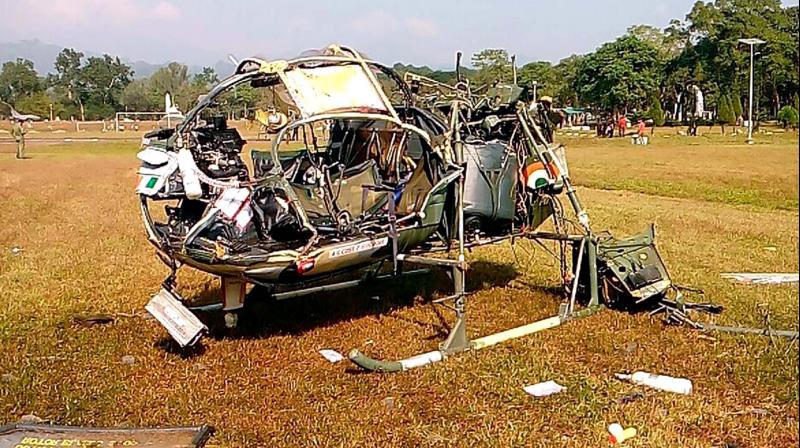 Kolkata: Three Army officers were killed while a jawan suffered critical injuries when an Army chopper, Cheetah, crashed while landing at the Sukna military camp in Darjeeling on Wednesday morning. Army officials identified the deceased as pilot Major Sanjeev Lathar, his co-pilot Major Arvind Bazala - both of the Army Aviation Corps - and Lieutenant Colonel Rajneesh Kumar of the Corps of Engineers.

They were posted at the Indian Army’s 33rd Corps headquartered in Sukna under the Eastern Command.

The condition of the injured Sapper, Dhamne Yogesh Bhaskar, who was admitted to Bengdubi Military Hospital, is critical.

Eastern Command spokesperson Wing Commander S.S. Birdi said, “A court of inquiry has been ordered by the Army authorities to ascertain the cause of the incident.”

According to sources, the Cheetah, carrying the four Army personnel, took off from the military base at around 9.15 am for a routine aerial recce in the forward area.

“While returning from the routine sortie, the helicopter crashed while landing at the military station at around 11.30 am,” Mr Birdi added.

Lt Col Rajneesh, Maj Sanjeev and Maj Arvind suffered fatal injuries. They were declared brought dead at the hospital. Accompanied by other Army officers, Colonel Deb Kumar Sen visited the crash site. Sources said a malfunctioning in the chopper’s tail rotor could have led to the crash about 20 feet off the ground.

While Lt Col Rajneesh was a native of Farrukhabad in Uttar Pradesh, Maj Sanjeev hailed from Bhiwani in Haryana and Maj Bazala, who got married recently, from RS Pura in Jammu & Kashmir.

In July 2010, a MIG-27 fighter aircraft had crashed in Jalpaiguri, killing four people, nearly five months after two separate incidents of MIG fighter jets crashing in the district without resulting in any casualty.