Blaze under control after 17-hour battle

Some fire brigade personnel were also injured during the rescue operation. 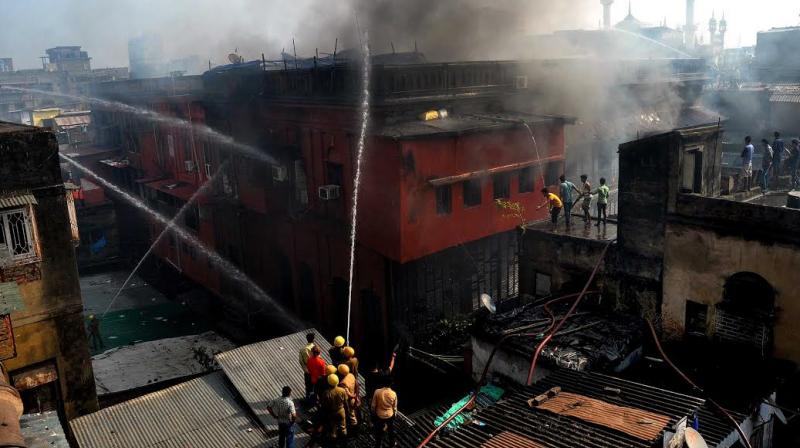 Fire brigade and disaster management force personnel along with local residents try to control the fire at a building in Burrabazar. (Photo: Abhijit Mukherjee)

Kolkata: In the wake of the devastating fire in Burrabazar chief minister Mamata Banerjee on Tuesday instructed the fire and emergency services department to take suitable measures to ensure that such inferno are prevented. The fire which broke out at the residential building at Amratala Lane in Burrabazar on Monday night came under control after 17 hours on Tuesday. Several people were trapped inside. Some fire brigade personnel were also injured during the rescue operation. State fire minister and mayor Sovan Chatterjee, who had visited the spot along with local Trinamul Congress MLA Smita Bakshi, met the chief minister at the state secretariat Nabanna on Tuesday afternoon.

He informed after the meeting that his department, the Kolkata Police and the Kolkata Municipal Corporation (KMC), will soon conduct a survey of the buildings that are prone to fire and will submit a report to Ms Banerjee. Talking to reporters in Nabanna, Ms Banerjee said that there are some areas, particularly in central Kolkata, where the roads are so narrow that the fire engines cannot reach the spot for fire fighting.

“We have found out that people simply place a tarpaulin and resorts to cooking under it. We have made arrangements for rehabilitating a number of slum and pavement-dwellers at Gobindapur and Bonhooghly area but they hardly stay there. We will not tolerate the practice of cooking here and there under plastic or tarpaulin cover which poses a serious fire risk,” the chief minister said.

The blaze in Burrabazar came under control on Tuesday morning as nearly 30 fire engines were pressed into service, along with the disaster management group. But heavy heat affected the three-storeyed old building as a portion of staircase and roof collapsed.

Traffic movement remained suspended along Rabindra Sarani from Poddar Court. Vehicular movements were restricted on Mahatma Gandhi Road towards Burrabazar. Though the exact cause of the blaze is yet to be ascertained, fire brigade officials suspect that storage of combustible items may have led the situation to aggravate. A team of experts from the state forensic science laboratory will visit the spot in the next few days to collect samples for examination.