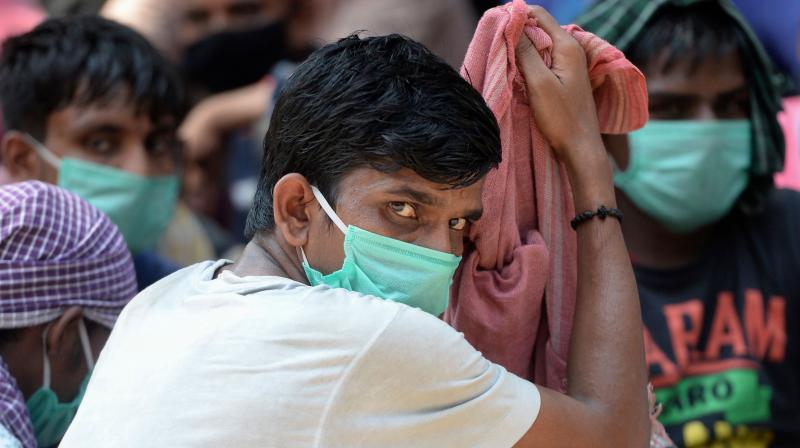 Guest workers gather at an assembling centre to get transferred to a railway station to board on a special train to Bihar after the government eased a nationwide lockdown imposed as a preventive measure against the COVID-19 coronavirus, in Chennai. PTI Photo

Chennai: In no mood for the central govenment's enthusiasm to unlock the country, the Tamil Nadu government has decided to extend its Covid-19 containment and control measures until June 30 midnight, chief minister, Edappadi K Palaniswami announced Sunday.

The AIADMK government has chosen to pursue a policy of caution and kept most of the general restrictions in operation until June 30. However, it has allowed public transport to operate except in Chennai and the three northern districts of Thiruvallur, Kancheepuram and Chengalpattu which are seeing a flare-up of coronavirus cases.

Exercising powers under the State Disaster Management Act, the chief minister's decision is based on the Union Home Ministry's latest order that extended the lockdown in containment zones (CZ) up to June 30. All existing general restrictions in the containment zones will continue. At the same time, the relaxations allowed for various economic and allied activities outside the CZs, in rural areas like agriculture, essential grocery stores and the like, besides the recent relaxations given with riders to a host of other activities in urban areas including Chennai, will continue.

BUSES TO BE BACK

At the end of Lockdown.3 on May 17, when it was extended till May 31, the government had notified 25 districts where it eased several restrictions. Now in this phase, the big relaxation is allowing public road transport to resume by Tamil Nadu State Transport Corporation (TNSTC).

For this purpose, Palaniswami said in an elaborate press release that the state was being grouped into eight zones:

Palaniswami said public road transport will continue to be prohibited in Zone 7 and 8 , namely Kancheepuram, Thiruvallur and Chengalpattu, besides Greater Chennai.

In all other zones, TNSTC buses can ply from June 1 up to 50 per cent of their zonal fleet. However, buses can carry only up to 60 per cent of their seating capacity, observing social distancing and other norms. Travelling within the designated transport zones will not need an ePass, even as in designated routes "stage carriers" will be permitted, he said. All the crew will be periodically tested and strict hygiene in buses ensued.

However, Palaniswami made clear that barring certain categories like transportation of essential articles and goods, the ban on Inter-State public transport and Inter-Zone (from one zone to another) public bus transport will continue. This is part of the efforts to contain the Covid-19 spread, as more and more incoming persons from other States are testing positive.

The transport corporations will have to abide by all other SOP (standard operating procedures) issued by Ministry of Health and Family Welfare and the State Government including compulsory wearing of facial masks, observing social distancing, use of hand sanitizers and so on, he said. ePasses will still be needed for passengers for inter-zonal and inter-state travel.

Mr. Palaniswami said the already prohibited general activities, like running of schools, colleges, research institutes, coaching centres, prohibition of people's gatherings at religious places/ places of worship and religious meetings, will continue until further orders. For students, however, onlilne classes and e-learning could be encouraged.

However, hotels and restaurants will be exempted to the extent they accommodate police personnel, government officers, medical personnel on Covid-19 duty, transit passengers and passengers who are 'isolated'.

Tourists will not be permitted to visit hill stations like Ooty and Kodaikanal, while the existing cap on number of people participating in marriages and death ceremonies will continue, besides the shut down of resorts.

Except in Greater Chennai Commissionerate area and in containment zones, IT companies and other private companies are allowed to ply their own vehicles for their staff, with a per trip cap of 40 passengers and 50 per cent of the workforce in the case of latter, the official release said.

Barring malls, all showrooms including textiles and jewellery can open from June 1 with 50 per cent of their workforce and subject to other guidelines including switching off the air-conditioners and allowing up to five customers at a time. The 50 per cent occupancy norm will apply for tea shops also which can allow customers within their premises from June 8.

With the Centre permitting re-opening of restaurants and hotels where people can sit and eat from June 8, Mr. Palaniswami said they should allow only 50 per cent of their tables to be occupied, ensure social distancing among visitors and switch off air-conditioners.  Within transport zone, passengers can hire autos and taxis sans ePasses, subject to other rules.

Again, barring Greater Chennai Commissionerate area and CZs', industries including IT companies and all other private companies will now be allowed to function with full 100 per cent of their respective workforce, though to the extent possible 'work from home' should be encouraged, he said.

The State-owned Tasmac-run wine shops will function from 10 am to 8 pm, while groceries and other essential/stand-alone shops will continue to be open as per the conditions already announced.

Mr. Palaniswami said E-Commerce firms will be allowed to supply all types of goods (essential and non-essential), even as autos and taxis will be allowed to ply in towns and cities. Nonetheless, there will be no relaxations in any of the Containment Zones, where all restrictions will continue, he made clear.