The bus was en route to Delhi from U.P’s Jalaun district when the incident occurred at 5 am under Rabupura police station limits, said the police. 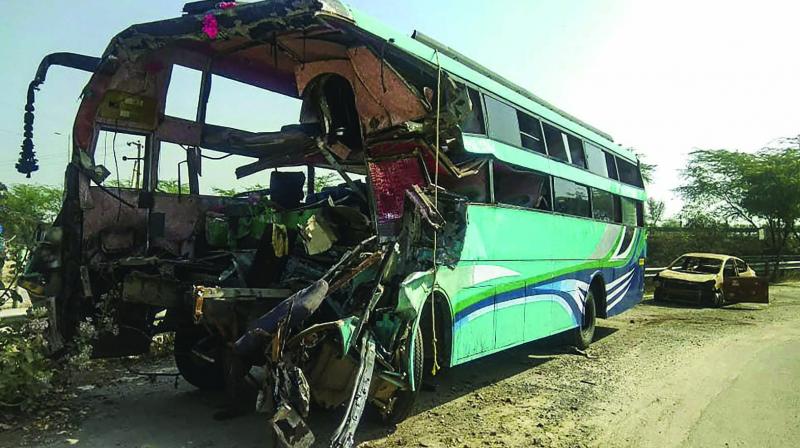 The ill-fated bus which rammed into a truck on Yamuna Expressway on Friday. (Photo: PTI)

GREATER NOIDA: In a tragic incident, eight people were killed on Friday morning when a privately operated bus rammed into a stationary truck on the Yamuna Expressway in Greater Noida. Another 30 people on board the bus were injured and rushed to a private hospital for treatment.

The bus was en route to Delhi from U.P’s Jalaun district when the incident occurred at 5 am under Rabupura police station limits, said the police.

U.P chief minister Yogi Adityanath condoled the deaths, while top officials of Gautam Buddh Nagar, including district magistrate B.N. Singh and police chief Vaibhav Krishna, met the victims in the hospital. “I am saddened by the demise of eight people in a bus accident in Greater Noida today. Praying for the peace of the departed souls and strength to their families. Also wishing a speedy recovery to the passengers injured in the accident,” Mr Adityanth tweeted. Police circle officer of Jewar, Sharat Chandra Sharma said: “Eight people were killed and 30 injured in the incident. The victims were rushed to the nearby Kailash Hospital in Jewar. The speeding bus rammed into a tanker which was moving relatively slowly.”

“The exact cause of the incident is yet to be confirmed, but prima facie it appears that the driver was drowsy. The tanker was moving at a slower pace and the speeding bus could have comfortably overtaken it, but instead rammed into it,” Mr Sharma said. The deceased have been identified as bus driver Mahesh Kumar (48), helper Bandu (25), passengers Vineeta (32), Arun (42), Asad (12), Suman (35) and Vishwanath Tiwari (75). The passengers were from Jalaun, while the driver and helper hailed from Dhaulpur in Rajasthan, a police spokesperson said, adding that three women and three children were among the 30 injured who hail from Auraiya, Jalaun, Phaphund and Noida.

“The identity of one deceased was yet to be established,” the official added. Earlier, an official spokesperson said the chief minister had taken prompt cognisance of the incident and issued directions for immediate relief for the victims. Samajwadi Party chief Akhilesh Yadav also condoled the death of the bus passengers and appealed for a compensation for injured and the kin of the deceased from the state government.