300 houses in Pune slum swept away by canal water

The slum was submerged in water for over three hours, resulting in residents losing all their belongings. 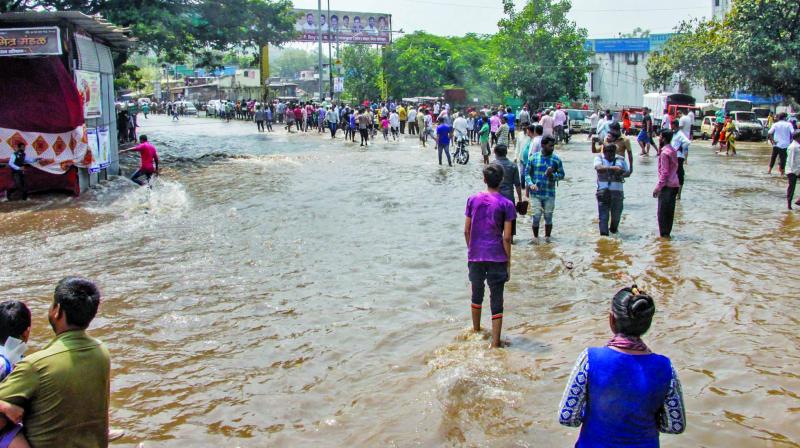 A road is water-logged after a breach occurred in a wall of the Mutha canal near Dandekar bridge in Pune on Thursday. (Photo: PTI)

Pune: Over 300 houses in a Pune slum were inundated with water after the wall of a canal on Mutha river broke on Thursday morning. The slum was submerged in water for over three hours, resulting in residents losing all their belongings. Due to the flooding on roads, traffic on Sinhgad road, Sargate, Shastri road and the nearby areas was affected for three hours.

It was a nightmare for residents of Janata Vasahat, survey no 130, near Sinhgad Road in Pune, when the right canal of Mutha River broke and water gushed to Janata Vasahat, Sinhgad Road and Parvati area at around 11am. According to locals, they were left to fend for themselves till the fire brigade team reached the spot after an hour.

Prashant Ranpise, the fire brigade chief, said, “Five of our officials and five personnel were able to rescue more than 50 people from houses that were full of water. Most of them were kids and senior citizens. We also rescued a disabled person, who was stuck inside his house. He is hospitalised. Over 50 vehicles, both two-wheelers and autos were damaged in the deluge.”

The irrigation department releases water from the Khadakwasla dam, located on the city's outskirts, to the Indapur and Daund tehsils of the district for farming and drinking purposes. The water released from the reservoir flows through the Mutha canal to these places. According to K. S. Shelar, an official from the irrigation department, “We immediately stopped the flow of water from the Khadakasla dam and also created a block here. As of now we cannot say why the wall got broken. We will study the situation to find the cause,” he said.

Meanwhile, only four houses remained undamaged in the slum. Due to the force of the water, most of the houses collapsed and the residents’ belonging were swept away. Kalpana Adsul, one of the victims, pointed to her empty room, with one wall collapsed and said, “My TV, fridge, gas cylinder were swept away by the water. Only some utensils and clothes stored in the upper compartments were left behind.”