Mr Gadkari talked about the need to develop waterways to reduce the burden on roads. 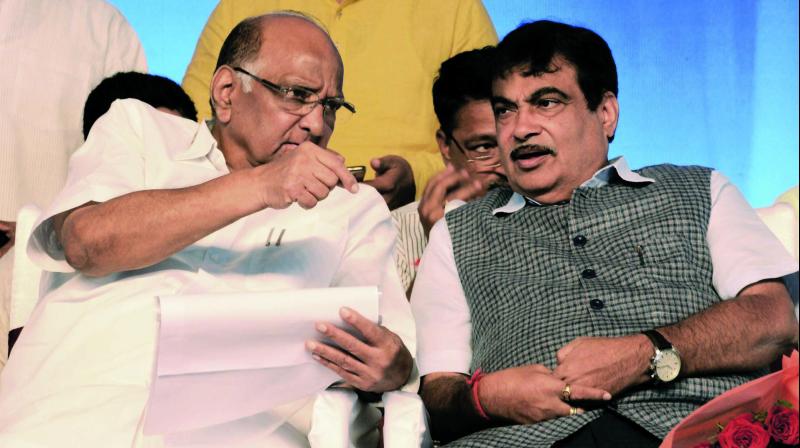 Sharad Pawar and Nitin Gadkari at the event. (Photo: PTI)

Pune: Nitin Gadkari, Union minister for road transport and highways, criticised the state urban development department, which is headed by chief minister Devendra Fadnavis on Sunday in Pune, saying “I have not seen a more hopeless department than the state urban development department as it takes over 20 years to just make plans for cities.” He added, “We need to plan for cities like in Singapore.” He was in the city to lay the foundation stone of a flyover in Kothrud.

Mr Gadkari expressed the need for more people to use public transport. “The transportation and automobile field in the country is increasingly occupying more space. But we cannot avail of more space to develop more roads, hence public transport is a need of an hour.” He also called for the need of more waterways to reduce the burden on roads. “We are developing water ways at ten rivers in the nation. In the same way, riverways must be developed on the Mula-Mutha rivers in Pune. Waterways should be developed across the nation to reduce the burden on roads.”

The minister criticised officials for not working and delaying the completion of infrastructure projects. “Availability of funding for the project is not an issue but the inability of babus to finish the task on time. My ministry is committed to finishing the projects we have taken up in time,” he claimed.

Mr Sharad Pawar, former Union agriculture minister, was also present at the event, lending credence to the rumours that the Nationalist Congress Party (NCP) is going to support the Bharatiya Janata Party government in the state. The buzz is that the NCP will get two ministries. But both Mr Gadkari and Mr Pawar refused to comment on that matter.