Interns and PG students infected by coronavirus in Chennai? 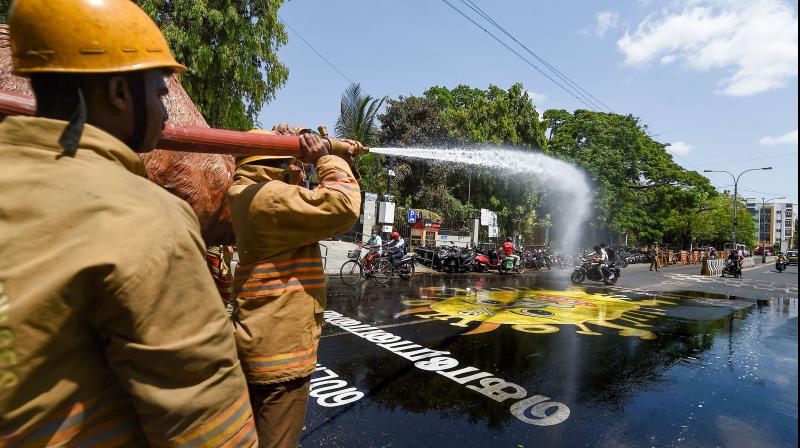 Tamil Nadu Fire and Rescue Services personnel spray disinfectant on a street in Chennai as a preventive measure against the coronavirus pandemic. (PTI)

Chennai:  An alarming message that is being circulated among ‘medicine PG students’ points to a massive government cover-up on the situation at the Rajiv Gandhi Government General Hospital with many interns and post-graduate students who did duty in the coronavirus wards being infected by the virus and forced to quarantine in their rooms.

‘MMC has been compromised. The PG hostel has been put under lockdown. The UG and CRRI hostel has been put under lockdown.’ So starts the message, and goes on to say, ‘The Department has broken down due to its cavalier attitude. As of now, please do not refer any cases. Casualty has been informed to directly refer cases to Stanley/KMC or other city hospital. Sorry for the inconvenience.’

Another alarm raised in the message is: ‘No CRRIs have reported for the past 5 days.’ Substantiating this, Doctors Association for Social Equality (DASE) general secretary G R Ravindranath issued a statement on Sunday alleging that all interns were locked inside the hostel and that it raised many doubts, making parents worried.

It was shocking that PG students have been infected by the coronavirus in a big way, Ravindranath said, adding that tests should be conducted on all interns and PG students and the results announced openly.

The message of the PG students said: ‘It is rumoured that many CRRIs and PGs are positive but they aren’t giving the swab reports – just telling to quarantine in hostel in separate rooms.’

The PG medical students are also claiming that patients were not getting drugs and that ward staff had turned positive and were being quarantined.

Ravindranath said it was regrettable that a lack of PPEs and non-adherence to protocols were the reasons behind the increase in the spread of Covid-19 among the medical community.

He alleged that doctors working in the coronavirus wards were given only seven days quarantine leave. Since the incubation period of the virus was two to 14 days, returning to work in seven days was unscientific as it can infect others and would not help prevent the spread of the virus, he said.

Ravindranath wanted the doctors to be given 14 days quarantine leave after seven days of duty and the setting up of a separate monitoring team.

To offset the shortage of doctors, Ravindranath urged the government to appoint more medical graduates, particularly those waiting for government posting after graduation.