The state government has announced a compensation relief of Rs 3 lakh each to the family members of the deceased. 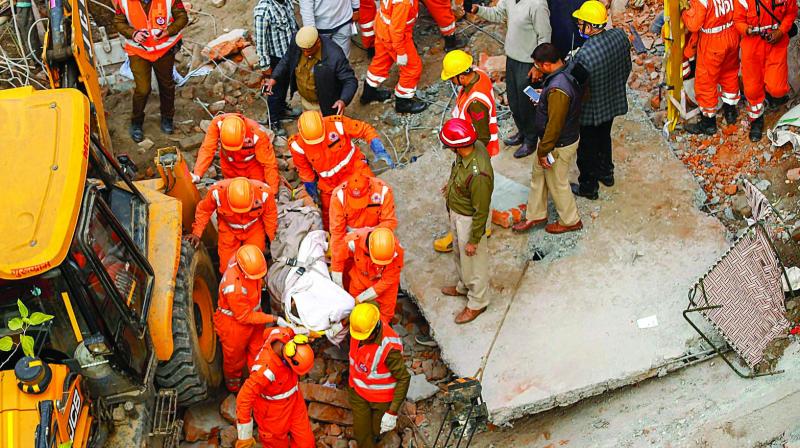 Rescue workers recover a body from the debris after a four-storey building collapsed in Gurgaon early on Thursday morning. (Photo: PTI)

Gurgaon: Six labourers were killed after an under-construction, four-storey building collapsed in a village here on Thursday morning, officials said.

Some more persons are feared trapped in the rubble of the building in Ullawas village near sector 65 of Gurgaon, officials said. The state government has announced a compensation relief of Rs 3 lakh each to the family members of the deceased.

“Six bodies have been retrieved from the accident site so far. The rescue teams are still on the job,” a National Disaster Response Force (NDRF) spokesperson said.

According to an official, the newly-laid ceiling on the top floor of the building had crashed, triggering the collapse of the entire structure.

“Those killed were on the second and the third floor, the building’s ground and first floor were vacant,” the NDRF official, involved in the rescue operation, told PTI.

Three of the deceased, identified as Kuldeep (32), Vishal (17), Altaf (24), were residents of Uttar Pradesh’s Ambedkar Nagar, while one Anand is a native of Bihar’s Samastipur, said Gurugram Police spokesperson Mr Subhash Bokan.

“The identity of the other two deceased was yet to be established,” he said. All the victims were asleep when the building collapsed, Mr Bokan said, adding that a magistrate-level enquiry has been initiated into the incident. The police said they are on the lookout for the building’s owner, a resident of Ullawas village. “Haryana chief minister Manohar Lal Khattar has announced a compensation of Rs 3 lakh each to the family members of the deceased in the building collapse,” officials said.

The Gurgaon Fire Department (GFD) control room received a call at 5.15 am alerting them about the collapse. Personnel from the police, the fire department, the NDRF and the Haryana state disaster management authority were involved in the rescue operation.

Two teams of NDRF from its base in Ghaziabad and one from its regional base in Delhi’s Dwarka were rushed to the site in the morning.

Another team of NDRF was sent from the Ghaziabad base in the evening to relieve one of the teams working since morning, an official said, adding the rescue operation would go on in the night.

The early hours of the operation made little progress as the rescue personnel had to move huge chunks of concrete, iron grills and other debris.

“NDRF responders removed rubble and cleared obstructive materials using high-tech equipment to reach the victims. Thereafter, a vertical approach was made with the help of specialised gear,” the NDRF spokesperson said.