The woman delivered a baby girl in the hospital and both are said to be in a good condition. 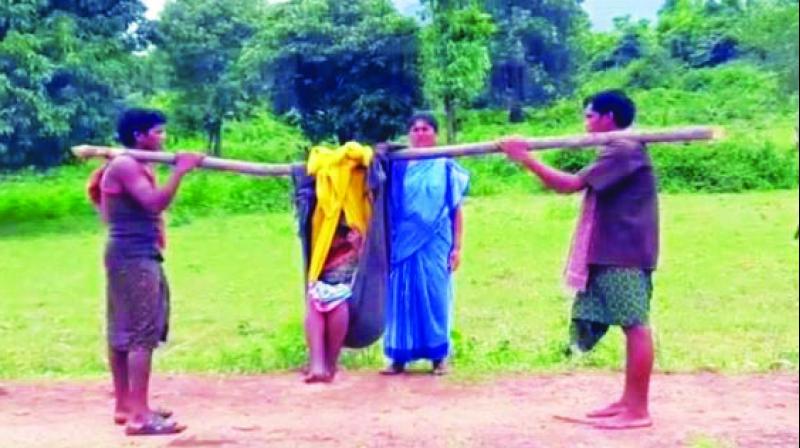 Kin carries the pregnant woman on a stretcher. (Photo: The Asian Age)

Bhubaneswar: Despite the media regularly highlighting medical negligence and lack of healthcare services in backward districts of Odisha, there seems to have been no efforts on the part of the Odisha administration to mend loopholes and reach out to people.

The faulty system once again came into focus as a pregnant woman was carried on a stretcher for 16 kms to a hospital in Kalahandi district, reports said on Sunday.

The incident was reported from Kansabundel village in Trilochanpur under Lanjigarh block, where a woman had to be taken to the hospital on a stretcher after ambulances could not reach her home due to a road blockade. Without having an option, the kin carried her for 16 kms.

The woman delivered a baby girl in the hospital and both are said to be in a good condition.

According to reports, the Accredited Social Health Activist (ASHA) worker called on 102 for an ambulance to take the pregnant woman to the hospital after she suffered labour pain on Saturday.

However, the ambulance could not reach her home after a fallen tree blocked the road to the village. Without having an option, the kin of the woman carried her on a stretcher for 16 kms. Later, she was rushed to Lanjigarh hospital in an ambulance.

The woman delivered a baby girl in the hospital and both are stated to be in a good condition. The incident took place just a few days after a pregnant woman in the same district was carried on a stretcher to the hospital due to ambulance failure and her newborn baby died.