Tomatoes down to Rs 10 per kg in Nashik APMC

Wary of a repeat, fewer farmers planted tomato, causing a shortfall in production in July this year. 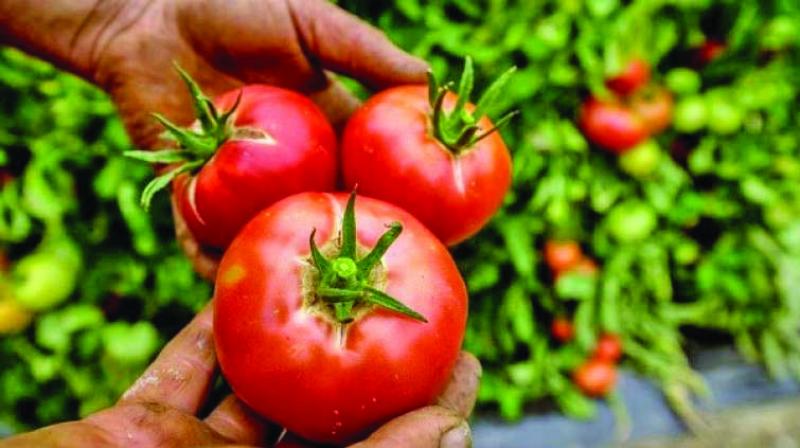 A glut in December 2016 led to tomatoes being sold at Rs 1 per kg, with most farmers finding it easier to use the vegetables as manure.

Nashik: Consumers have reason to cheer. Tomato prices are gradually dipping as more produce reaches APMCs in Nashik district. Last month, due to less production, rates had risen with tomatoes retailing for as much as Rs 80 per kg in Mumbai and Rs 40 per kg in Nashik. Minimum rates have now plunged to Rs 10 per kg in APMCs.

By comparison, in July 2016, the Pimpalgaon Baswant APMC received on an average 15,000 crates a day. While the highest price quoted is mostly for a small number of crates, vendors show the highest price and palm off low-cost produce at high rates, according to consumer activist Mahesh Avhad. A glut in December 2016 led to tomatoes being sold at Rs 1 per kg, with most farmers finding it easier to use the vegetables as manure. Wary of a repeat, fewer farmers planted tomato, causing a shortfall in production in July this year.

Despite the current shortage due to low production, the summer crop is now beginning to be harvested in August and prices are likely to reduce by 50 per cent, said NAFED director, Nanasaheb Patil. Shetkari Sanghatana president Anil Ghanwat said that the root of all farmers’ problems and price fluctuations was the government’s meddling in the agricultural sector. “Last year, tomato prices had reached Rs 100 per kg and government fixed the price at Rs 15. Scared farmers did not plant tomatoes. The traders however are making a profit,” he said.

Farmer Ravindra Jadhav said farmers were not the beneficiaries of the trend. “Generally, we get a yield of 100 crates per acre but now the yield is around 20 crates due to weather and other conditions,” he said.