Claim conditions mentioned in the state govt’s proposal are stringent. 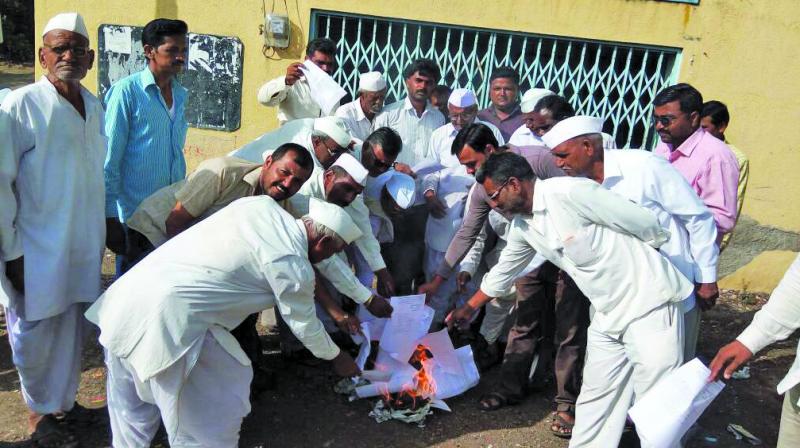 The farmers asserted that the state should provide relief to all the farmers.

Sarpanch Devendra Kajale threatened to reignite the protest. “Farmers in Maharashtra will continue to the agitate. We are against the stringent conditions mentioned in the loan waiver proposal,” he said.

Farmers in the state had gone on a strike from June 1, leading to a severe shortage of essentials such as vegetables, milk and food, especially in metro cities like Mumbai, which is dependent upon supplies from neighbouring districts. Milk was poured out on to the streets and vegetable trucks were blocked as farmers protest continued for almost a week. The strike was withdrawn after the state government assured loan waiver to small and marginal farmers.

Mr Kajale, who has a three-acre farm, said that the farmers spontaneously participated in the agitation held in front of the gram panchayat office in Karsul on Sunday.

“Farmers need tractors and vehicles to transport their produce and bring fertilisers from the market. We can’t rent vehicles every time,” he added.

He said that they were in talks with like-minded organisations and also veteran leaders to re-start the agitation. “We are waiting for the government’s resolution (GR) on loan waiver. After the government releases the GR, we will be able to understand all the requirements and then file our reply,” he said.

He added that his party’s national convention would be held in Nagpur on July 15 and 16, where all farmers’ issues would be discussed. “Shetkari Sanghatana (SS) late founder Sharad Joshi had made a plan titled ‘Bharat’s Integral Reconstruction & Development Programme’ which would also be discussed,” said Mr Ghanwat.